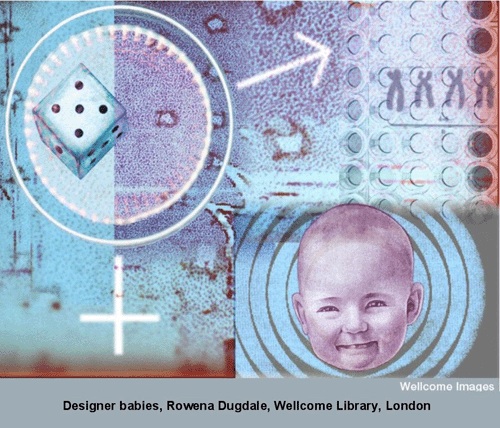 Commentary by Bernice L. Hausman, Ph.D.,Department of English, and coordinator of the undergraduate minor in Medicine and Society, Virginia Tech.

On December 29, I acted as respondent to a panel on biocultures at the Modern Language Association meeting. The panel, “Biocultures: An Emerging Paradigm,” was organized and chaired by Lennard Davis, who read from the manifesto (written with David Morris) introducing the recent issue of New Literary History (vol. 38, no. 3, 2007) discussed by Brad Lewis in his August entry to this blog. Jonathan Metzl gave a paper on “Protest Psychosis: Race, Stigma, and Schizophrenia,” while Jay Clayton spoke on “Victorian Epigenesis: Inherited Behavior without Genetics.” This blog entry is an edited version of my remarks.

Every year I lecture to the Careers in Medicine class at Virginia Tech on the social contexts of medical practice. This fall’s lecture was “Against Health,” inspired by a conference put on by Jonathan Metzl at the University of Michigan in 2006. Based in a Foucaultian paradigm to explicate the normalizing effects of biopower, the lecture challenged the idea that “health” is an unalterable good based in the truth of scientific evidence. I had focused on the problem in making “health” the goal of life — not a means to a good life, but a substitute for life altogether, such that working for health has become a major preoccupation for many people and is now a measure of goodness, morality, and righteous living. Since “science,” through what is now called “evidence-based medicine,” provides the ballast for concepts like “health,” “health” is unassailable. “Health” cannot be challenged because it is based in the truth of scientific study. But that is only through a very narrow framework for analysis — the same kind of framework that suggests that one’s eating habits should be determined by the results of a blood cholesterol test rather than cultural traditions or the local availability of various foodstuffs. I was trying to dislodge this narrow framework by suggesting its stresspoints and problems, by highlighting the historical particularity of lifestyles framed by scientific studies and medical prognostications.

At the end of the lecture, one frustrated premedical student asked me, “what’s your data?”

As Lennard Davis points out in the manifesto, “data” is a point of contention between the sciences and the humanities, despite decades of excellent research in science studies. Indeed, we still operate with the understanding that in the humanities we have “critical thinking (i.e., no data) while in the sciences there is strong data, usually conveyed in numerical form. Having no data is tantamount to having no truth. In the cynical view, “critical thinking” might be figured as that activity one engages in the absence of any clear truth, the intellectual game one plays with no data. “Critical thinking” is what the humanities offers the world, but only because the field is perceived to lack true data and the valuable facts that emerge from it.

Any biocultural synthesis thus faces the degraded profile of the humanities in public culture and the hegemony of “science” over “truth.” Even in arenas where humanistic knowledge might be especially helpful, it is absent or denied. At the 2006 International AIDS conference in Toronto, the social sciences made it into the program, but the humanities were completely absent. One session I attended addressed “controversies around prevention strategies for sex workers and injecting drug users, showing how politics and ideologies are pitted against “good science”.” At this session I was struck by two assertions — 1st, that good science is as an antidote to politics and ideology, and 2nd, that scientists are equipped to identify and overcome ideology. I suggested, in keeping with Len’s claims, that in addressing these issues, “scientists should look to . . . humanists and interpretive social scientists who think about the work of ideology and its sociocultural effects.”

This is precisely the kind of intervention that Jonathan Metzl is making in his research on the racialized meanings of schizophrenia in the twentieth century. His claim does not merely concern the social determinants of disease categories and understanding, but addresses how the diagnostic process itself is racialized. He argued that schizophrenia actively functions to “enable mainstream America to grapple with” effects of the Civil Rights movement on the meaning of America; this claim demonstrates how biocultural analysis understands diseases as “disease entities,” in Len’s words. Jonathan’s project moves us closer to Len’s suggestion that “experiments using ‘race’ [would] be better — produce more reliable facts — if they employed a biocultural notion of what race in fact means.” Feminists have connected mental illness diagnoses to normalized and heavily gendered cultural scripts; it is time to determine how race figures in the construction of mental states and disease entities.

But how do we keep biocultures from being another form of enhancing science’s own projects, especially ones that misrecognize the existing and potential contributions of humanistic inquiry?

This is the problematic addressed by Jay Clayton in his paper on the new Neolamarckian epigenetics; he suggests that in policy contexts, “our (that is, humanists’) absence from the room skews the resulting image of culture.” The time is ripe, he argues (although without cliché), to move into the policy arena through the specific study of literature and an understanding of its historical embeddedness. This deep understanding, as opposed to the vague gesture toward literature as the repository of timeless values, allows literary humanists to engage knowledgeably in the important ethical and policy debates surrounding new technologies, practices, and aspirations in the biosciences. We must enter into what Jay calls the “semi-autonomous realm of policy” — the institutional context that, in his words, “gives critique at least a chance of having real consequences.”

The biocultures initiative asks us to get into the scrum and tangle with the significant scientific and medical issues of the day. This endeavor stands to revitalize the humanities. It does so not only by insisting on putting scientific endeavors in context, but also by rethinking humanistic inquiry itself, particularly how its findings are unique and potentially useful to those who are not by profession nor inclination humanists. Significantly, Jay argues that we must do this by coming forward “as experts in our own fields,” not through a flattening of our interpretive acumen or a repackaging of our ideas to “the people.” Policy contexts are, indeed, a good match for the kind of analyses we develop in literary and cultural study — attentive to detail and consequence, broadly descriptive but at the same time focused, our interpretive practices tend to take an example, develop an understanding of context, and make broader conclusions with suggestions for caution and specificity. These seem ideally suited to public policy.

In the case study example that Jay provides, current epigeneticists are confident that their support for directed evolution and the inheritance of acquired characteristics, based in “strong” data, will avoid eugenic tendencies and arguments for intelligent design, both construed as ideological overlays on scientific findings. These arguments seem to replicate the “good science” over “bad ideology” claims made in Toronto that I alluded to earlier. Literary analysis allows us to see the mutual and inevitable imbrication of science and ideology, such that the good and bad cannot be disaggregated from the mix so easily and assigned a stable meaning. As Jay points out, culture mediates the meaning of scientific findings in ways that scientists rarely control. The difficulty of separating science from ideology, beliefs grounded in “data” from utopian longings, is captured in Charlotte Perkins Gilman’s Herland, another Neolamarckian text devoted to eugenics and presenting a feminist utopia simultaneously enabled and marred by its racist science. The modern history of biology is haunted by the “race problem” because it remains culturally unsolved, and vice versa — the modern history of culture is haunted by the “race problem” because race remains a biological puzzle, seemingly evident somatically but nonexistent in a genetic sense.

Finally, the biocultures paradigm suggests that the answer to “What’s your data?” is neither the social construction of knowledge nor the idea of the text. Data is the selective information that we interpret as findings. All disciplines engage in this exercise, as Len suggests in the manifesto. The data themselves are facts, but they are not in themselves significant without interpretation. In literary analysis, reading produces data analyzed through the varied frameworks of criticism. Our expertise is in identifying, selecting, and interpreting the data of textual and discursive contexts, and linking these to broad cultural patterns, both historically and contemporaneously, as well as developing rich understandings of the complexity of linguistic significations.

In the language of my institution’s former tag line — “putting [this] knowledge to work” — or, in its new brand — using it to “invent the future” — I want to advocate the serious challenge this expertise represents, especially to status quo humanities. Revitalizing the humanities through biocultures will only happen when we begin to believe that speaking beyond our own kind, and presenting our evidence for others, matters. Because we so often speak in forms of discourse meant only for our own kind (that is, decipherable only by other literature professors), I can only deduce that we do not think our contributions to knowledge make a difference outside our own, relatively enclosed, worlds of practice. As Jay made clear, the answer is not a dumbed down humanism but a willingness to engage with that expertise — its data, its interpretations, and its knowledge in the strongest sense — in the contact zone of public science policy.

Editor’s note: Those who don’t have access on-line to New Literary History will find a similar version of the biocultures manifesto at the biocultures website:
http://www.biocultures.org/index2.php?page=links