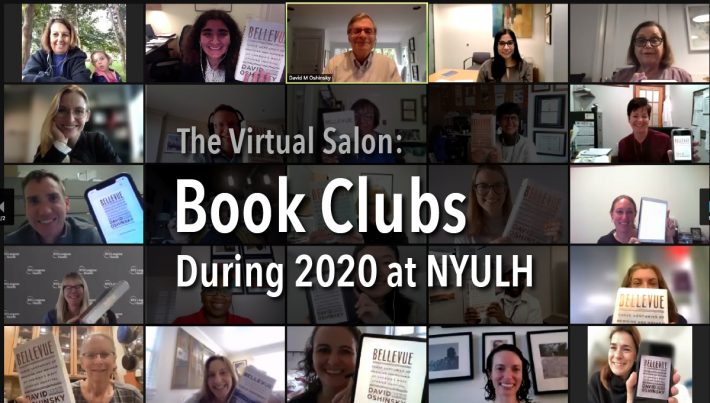 When thinking about these last two years, I can’t help but think of books.  Just as with each aspect of our lives, as an avid reader, what I’ve read (or not read), how I’ve read it, and who I’ve read it with has been deeply impacted by the events of 2020.

Looking back at the beginning of the pandemic, or rather the realization of the beginning of the pandemic, everyone seems to have a story of the moment “it” dawned on them – the moment that the pandemic became real.  For far too many, it came with illness, a change in employment, or the inability to see loved ones.  For me, in my first year of medical school, I was privileged that it came in the form of an email from the school’s administration encouraging us to go home, if we were able.  Not an hour later, a flight booked for the following day, I stood in front of my bookcase debating which books to bring with me across the country – picking up and putting Spillover back on the shelf; tucking the medical student book club read, The Tennis Partner, in my carry-on; and stashing two other books that have faded to memory at the bottom of my duffel.  Like others, I believed I would return to NYC in a matter of weeks to replace these books, pull others off my shelf, and be there to lead an (albeit delayed) book group session on The Tennis Partner with freshly baked cookies.  Of course, that’s not how the spring went.

Within days of being home, a collection of William Carlos Williams poetry, The Golden Spruce, and Andrea Wulf’s The Invention of Nature were on their way to my doorstep.  Another six or so books would be ordered in the same number of months, along with another dozen and half borrowed from my local library’s e-lending service.  During this time of uncertainty, books were a salve.  They became one of the few things friends and I could discuss over the phone that deviated from the newly normalized discussions of case numbers, R0s, shutdowns, and more.  We were not alone in our reading, book lists popped up all over the internet and were shared through email listservs, social media, and direct messages.

About six weeks after leaving NYC, Alex, the other leader of the medical student book club, and I were getting messages, emails, and calls with hints of themes of The Tennis Partner from our classmates – it seemed we had not been the only ones to bring a copy home with us.  Realizing how much desire there was to see each other outside of the confines of virtual lectures and seminars, we organized a Zoom book club session and soon after, another and then another and another. It became a semi-regular ritual, covering fiction and nonfiction selections focused on subjects that were “medically adjacent,” if not directly related, including Maylis de Kerangel’s The Heart looking at the impact surrounding a heart transplant, how mortality was processed and understood during the Civil War in This Republic of Suffering, and the way in which business, wellness, and diet interact in The Kelloggs.

Leading a book group in 2020 and perseverating over what book to read, where/how to meet, and how to lead discussion while physically separated made me curious about whether other book groups at NYU Langone Health were asking these same questions during this time.  Through a Rudin Medical Ethics & Humanities Fellowship, I was able to more rigorously answer this question.  I met book group leaders from across the institution spanning departments, levels of training, and with different goals in mind.  I discovered five groups that started before March of 2020 and continued throughout the pandemic.  These groups, outside of the medical student group, included the Department of Radiology’s Research Innovation Book Club, a collection of residents in the Department of Pediatrics, and a cross-institutional book group known as the Patient Experience Book Club.  An additional group started in late spring as a way for busy psychiatry residents to continue to bond and discuss concepts in their chosen field while separated due to newly remote practice or while on rotations on medical floors.

Just as Alex and I, with initial concerns from a faculty guest, decided our group would not read a certain graphic novel as it seemed too sad for such a tumultuous time, other book groups did not touch anything with too obvious a theme of plagues, pandemics, and infectious diseases, acknowledging that those ideas were already too commonplace in our everyday.  Though only three groups read books directly related to pandemics (including Camus’s The Plague and the unintentionally related, Hamnet), each group noted that discussions of the pandemic pervaded their discussions.  As one leader put it, “COVID is an uninvited guest at the [discussion] table.”

The largest shift in what groups read came in June.  After the murder of George Floyd, the resurgence of the Black Lives Matter movement, and the increased focus on racial injustice, three new reading groups were developed at NYULH focusing on themes of racial justice and diversity and inclusion.  Established groups added additional readings, with common selections including Fatal Invention, White Fragility, Caste, and Between the World and Me.

The events of 2020 impacted not just the content read, but the manner of meeting.  Each group transitioned to video-conferencing and one group stopped meeting altogether soon after the start of the pandemic due to increased clinical demands during that time.  The challenges to such a transition were apparent to all groups that used Zoom or Webex:  meetings needed to be shorter than an hour, conversation could be stilted as typical social cues were absent, and digital silence was perceived as more uncomfortable rather than thought-provoking.  But, there was one definite advantage – participants could join from anywhere.  In addition to the social need to connect and some members having more time to read, this likely contributed to the fact that three of the original groups began to read more and meet more regularly (with one book club doubling the number of books it normally read).  One group began to experience Zoom fatigue toward the fall and was on hiatus until near the end of my interview period, when they were able to escape their screens and meet safely in person after being vaccinated – a hopeful and fitting conclusion to my research.

Ultimately, I discovered that the book groups were both a bellwether and a representation of the shift and reality of the events of 2020 as they played out over time – how groups met and what they read reflected what was occurring in the wider world.  During 2020, book groups were virtual, pop-up salons.  Except in this era, Zoom rooms replaced drawing rooms and scheduling was done by email, but what remained was the role of the salon: an intellectual and social meeting ground to discuss and analyze the ideas of the time.

Though I initially started looking into how book groups adapted to 2020 to answer a fairly specific question, I was humbled in my research and interviews.  Witnessing frontline healthcare workers finding bandwidth during that tumultuous year to continue to connect, challenge themselves, and discuss meaningful books and literature while still upholding their normal duties was a powerful testament to the devotion these individuals had to better understanding the world for them and their patients.