When Breath Becomes Air, written by Paul Kalanithi, MD, and published after his death from stage IV lung cancer was the first book selected for NYU Langone Health’s “Big Read,” an initiative that invites faculty, staff, and students to read the same book at the same time. Participants then join discussion groups to engage in dialogue about end-of-life care, and how to help patients focus on what is most important to them when confronting a life-altering diagnosis.

Paul was a promising neurosurgeon, nearing the end of his residency training at Stanford University, when he learned of his illness and faced the question of how to make his remaining time as meaningful as possible.

His wife, Lucy Kalanithi, MD, was his steadfast partner in this difficult process. At the time of Paul’s diagnosis, Lucy was also a resident at Stanford, in internal medicine; the two met and fell in love as medical students at Yale University, bonding in part over their love of literature and the insights it provides into human experience. “He saw medicine and literature as twinned . . .” she said of Paul on a recent visit to NYU Langone Health’s main campus. “They are getting right to the heart of the human condition.” 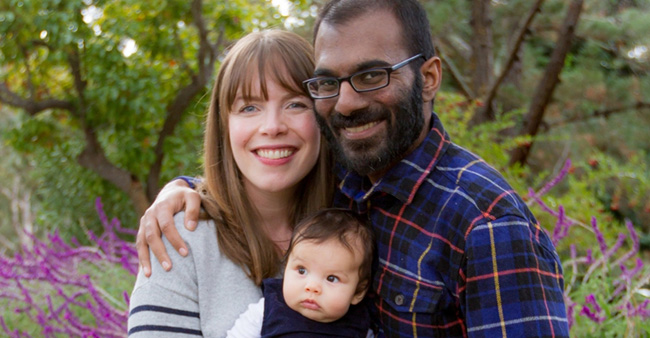 Drs. Lucy and Paul Kalanithi with their daughter, Cady, before his death from lung cancer in March 2015.
His remarkable book, ‘When Breath Becomes Air,’ has been read by more than 1,000 faculty and staff
as part of NYU Langone Health’s first ‘Big Read.’

Through the co-sponsorship of the Rudin Program in Medical Ethics and Humanities and the office of Dr. Robert Press, Lucy Kalanithi visited NYU Langone on Monday, April 16. She participated in a lunchtime conversation with medical students and residents, where second-year student Eli Cahan was honored for winning first prize in the Paul Kalanithi Fiction Award, created in Paul’s memory. You can read his winning short story on the Stanford Medicine website.

Later that day, Lucy was interviewed for a live-taping of the podcast “Person, Place, Thing,” hosted by Randy Cohen, a former New York Times Magazine contributor who wrote the weekly column “The Ethicist.” Cohen asks his interview subjects to choose a person, a place, and a thing that have special meaning to them, with the idea that people’s choices speak volumes.

For her person, Lucy chose two teams of people—nurses who worked in the intensive care and labor and delivery units at Stanford Hospital during a time when Paul had been admitted there, and Lucy was pregnant with their daughter, Cady, now age three-and-a-half. Without anyone asking, the nurses were planning for Cady’s birth. Could Paul, weak and on an IV-drip, be brought into the delivery room? Could a newborn be brought into the ICU? How could they create the best experience possible for this new family under difficult circumstances?

“These nurses were having all these behind-the-scenes discussions,” Lucy told Cohen. “It brings up questions of, what does ‘quality’ really mean in healthcare?” She added, “Nobody had [a solution] for that scenario in their job description, yet they did it without question.”

Lucy’s place was Acadia National Park, for which Cady is named. Paul and Lucy had spent time there together as a young couple, after he surprised her while she was doing summer research nearby. They decided to have Cady after learning that Paul was terminally ill, a choice that some readers of the book, at NYU Langone and elsewhere, have questioned. Lucy said of their daughter, “She feels like the past stretching into the future.”

She made a book for Cady about Paul, including similarities between father and daughter. “He’s like a character in a book to her right now,” she said, adding that Cady knows her father by his absence. When she has to explain to her toddler-age daughter what it means to be dead, she uses the wording currently favored by child development experts: “His body stopped working.”

Lucy’s “thing” is Paul’s wedding ring, which she wears on the middle finger of her right hand. She expressed surprise that her love for him feels in many ways unchanged since his death. “The feeling of loving Paul—the feeling of wanting to do things for Paul, or feeling proud of Paul, has totally continued since he died,” she said, adding, “Anybody who has lost somebody—it [the love] doesn’t stop.” And she—and his book—have kept him alive. She continues to speak about him and for him, as she put it, doing an extended book tour on his behalf.

Paul wrote When Breath Becomes Air, she said, as a way of being an active participant in his illness, rather than a passive object; as a means of reflecting on his experience even as he was still going through it; and to leave behind something of lasting value, and indeed part of himself. “Your writing,” she said of Paul and indeed of anyone who commits words to print, “will be you persisting, even after you’re gone.”

For more about When Breath Becomes Air, please read the annotation in the LitMed Database.