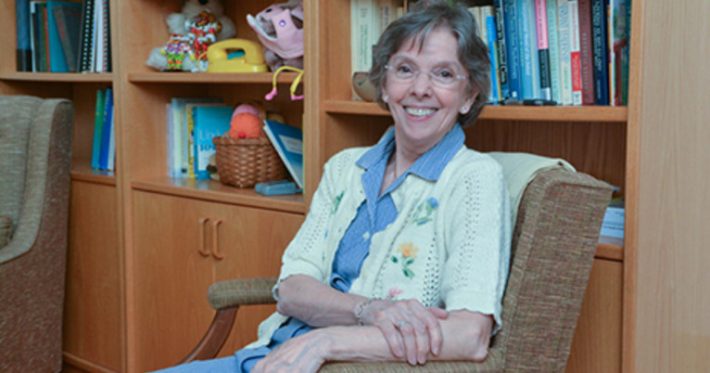 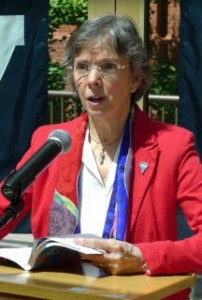 Dr. Annita Sawyer is a psychologist and the author of several essays, stories, and a memoir titled Smoking Cigarettes, Eating Glass, which was published in May 2015.

In 1960, however, Dr. Sawyer was battling mental illness and thoughts of suicide. She was institutionalized and underwent 89 electroshock treatments. Although traumatized by her experience as a patient, Dr. Sawyer survived the broken mental health system of the 1950s and 1960s and went on to graduate summa cum laude from Yale, earn her doctorate and join the faculty of the Yale University School of Medicine. In 2001, Sawyer sent for the records from the years she was a patient at the two psychiatric hospitals. She decided to reveal her past and began to write only after she had begun to recover from revisiting the early trauma and began to remember what had happened to her.

In this interview with Simone Leung, Dr. Sawyer discusses the process of creating her memoir, how doctoring and writing play into her life, and shifting perceptions of mental illness today.

What originally led you to dig into your history, and why have you chosen to share your story in Smoking Cigarettes, Eating Glass at this point in time?

I’d been working full time for twenty years. As a psychotherapist I had reached a comfortable place professionally. My children were grown and on their own, so I had privacy. My husband and I were meeting with a marriage counselor who was struck by my sometimes vague, otherworldly demeanor, and the fact that in the middle of an argument I would often forget what I was talking about. She recognized this as dissociation, a symptom of trauma. I still had little memory of my first twenty years, and I had questions about my history, which I thought might have answers in the medical records. I wanted to find out the specific number of shock treatments I’d been given – my estimate of 54 seemed way too high. For all of these reasons, we agreed that I should send for the hospital records.

Conventional wisdom holds that the best way to make a point vivid and memorable is to connect it to a story about a real person. Reading the records triggered a dramatic revisiting of my early life – as a child and also as an adolescent in the hospital. All my old symptoms returned, overwhelming me. Memories I thought had been erased by shock treatment returned in many forms. Most striking were intense physical reactions that often lacked thoughts – memories were stored in my body even though they might have been erased in my mind. This experience of the enduring effects of trauma was so amazing to me that I was determined to share what I’d learned. I felt an urgent need to inform clinicians of the harm they could cause by being careless, by not paying attention, beginning with diagnosis.

A mental illness diagnosis has a powerful influence on one’s sense of self. Also diagnosis often determines treatment and some treatments have severe life-changing side effects. Misdiagnosis can seriously compromise people’s lives.

Beyond medical side effects, shame and stigma adds to the suffering already caused by mental illness. It can lead people to deny that they are having problems, or to avoid getting help, because treatment also carries stigma. This stigma also affects families and friends, who worry about shame by association. I kept my past hidden for most of my life, long after I was working as a psychologist. This secrecy was a given: no one ever suggested that I should stop hiding my past. However, the gratitude people show – friends and strangers alike – along with their references to my bravery now that I am speaking about my experience, makes clear how powerful the stigma is and how important it is that we work to diminish it.

And finally, I’m here, alive, today because I was fortunate to find the right therapist and to recover through psychotherapy. By showing how it worked for me, I want to inspire people both not to give up and to invest in good quality psychotherapy.

When you were sorting through your journal entries and gathering material for your memoir, did you find yourself having to filter out certain details? If so, could you talk about the process of determining what should be made public and what should be left personal?

Initially I was writing from the midst of urgent chaos, seeking to hold myself together by putting thoughts on a page. I repeated lots of fears; I can see looking back that I was in certain ways repeating my earlier hospital thinking. I had a sympathetic and savvy therapist who encouraged me to write down what was happening and to send it to her by email. The details I filtered out over time included primarily what I considered over the top melodrama. I also toned down what felt like was terrifically immature neediness in my relationship with my therapist. There was just so much embarrassing information I could bear to reveal.

In one of your essays, you explain that you initially held back from sharing your history in part due to fear that it would affect your professional reputation. Did opening up about your past and vulnerability affect your practice?

I am not alone in my concern that the stigma attached to acknowledging a history with mental illness could risk my professional reputation. A number of colleagues have confided their own fears. I kept my past hidden until I’d been in practice for more than twenty years.. The first time I spoke at a psychiatry grand rounds, I was a co-presenter and my name was not on the announcement. Before I did that I met with both a long time supervisor, a senior psychologist in New Haven, and with my former psychiatrist, checking with each one to make sure they didn’t think I was compromising myself professionally to do this.

All of these precautions may or may not have made a difference. In fact, everywhere I’ve gone I’ve been treated with kindness and respect. I have been invited to make further presentations. People express gratitude and confide their own secrets. Among professionals my reception has been consistently positive. My patients appear unfazed. If anything, they say it makes them feel more secure to know how far I’ve come. They appreciate that I understand suffering.

Could you talk about the shame and fear of stigma attached to mental illness and psychotherapy today? Do you believe our perception of it is shifting and if so, how?

I hope that increased openness on the internet and the presence of more media series that include mental illness and psychotherapy will help to defuse the stigma. But every time there’s a mass murder or similar tragedy and the perpetrator is someone identified with a psychiatric diagnosis much of the media hype that follows only serves to reinforce the fear, and thus stigma, again. I don’t think there’s a good way to change this except for successful, accomplished, public people to begin to refer to their therapy sessions or their childhood therapist or the year they had to drop out of college for treatment, etc. as if that was a perfectly reasonable response to the situation at the time, so that the public perception shifts to seeing mental illness and treatment, especially psychotherapy, as part of a continuum, as much more common that one would think and something that can be dealt with successfully.

Smoking Cigarettes, Eating Glass, “The Crazy One,” “The Other Chair,” and many of your other works seem to draw almost exclusively from your personal experiences. What is appealing about writing nonfiction to you?

Nonfiction is what I know. I haven’t tried to write fiction because I worry I couldn’t create a good enough story. My own life in psychiatric hospitals, however, delivered hundreds of stories already made. I just had to learn how to capture them on the page. There’s the challenge of telling a good story as a way to make a psychological point. By using myself I can show the many sides of a simple action – the shame, fear, excitement, dread and hope that can be part of making a decision or taking a stand. I can illustrate emotions and psychological dilemmas without wondering if I’m accurate or not. The truth has sort of been handed to me and I’m using it.

As a psychologist and an author, you straddle the worlds of medicine and humanities. Could you talk about the interplay between your professions?

At the center of both medicine and humanities is the individual human experience. Yet that experience takes place in a context. We’re all products of families and cultures, which vary widely, to say nothing of the larger forces of economics and the natural environment.

For me personally, your question itself couldn’t be more affirming. You accept as given that I am an author as well as a psychologist; you refer to my professions, plural. And today this is true: I belong to both worlds. Each enriches the other. I find joy in both. Often the mistakes I make in therapy, the times I’m insensitive or overlook something important, come from rushing, from filling in the blanks with my own assumptions rather than being patient and listening with respect. The more open we are to varieties of experience, the better we can listen and appreciate any particular individual we encounter.

Are you currently working on any new projects?

I have pages of ideas for new projects, but I haven’t yet been able to develop one beyond a few tentative stories. I’m learning that to have a book accepted for publication and then actually published and available is only another step in a long, ongoing process. It sounds trite, perhaps, but it’s like having a baby. Labor and delivery is just the beginning! I’ll be going to a residency in the fall where I’ll have three weeks to really focus on beginning something new. I want to write stories about psychotherapy from a variety of points of view – the patient and therapist perhaps, but also the patient’s parent or partner or child; people in the therapist’s life. I want to see if I can convey the effects of psychotherapy as they ripple beyond the consulting room, to show how it heals (or doesn’t) and how one person’s change affects a whole system. And I’m beginning to think I want to write a novel that would tell what I imagine to be my mother’s story.

Simone Leung is an intern at the Bellevue Literary Review. She is a rising junior majoring in Global Studies at Colby College and is interested in creative writing.

Sawyer’s story “The Crazy One” appeared in The Bellevue Literary Review: http://blr.med.nyu.edu/content/archive/2012/spring/crazyone