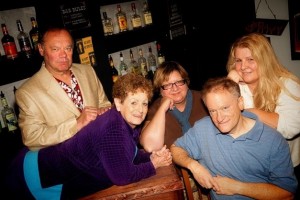 In a small off-Broadway theatre in NYC, it’s opening night for a new play, The Absolutely, Positively, Forget About it, Last Night at Von Dahm’s Sports Bar, Wing Hut and Karaoke Palace. The actors run through their lines one last time before heading to wardrobe, the props are on set, the music and lighting are cued. But there is something a bit unusual about this performance. The cast is composed of stutterers who have taken to the stage to face their fears of performing in public and to show others that it can be done.

Kathe Mull, the director of the play, chose a comedy in part to stretch the actors’ ability. She encourages the actors to look at the audience, rather than looking down or to each other, to cover up the trouble they have voicing their words. On stage, the actors perform their lines with only occasional stuttering. Sue Camlin plays a bar owner who is closing down after decades in business, forced out by a new hip bar across the street that is part of the gentrification of her Philadelphia neighborhood. Her friends join her to help pack, and, in the process, they uncover an interesting piece of the bar’s history. 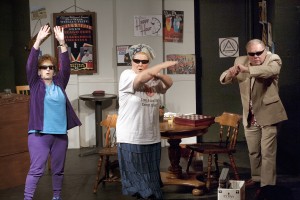 The play is a production of the Actors International Theatre, a company dedicated to giving voice to people with disabilities. Katherine Filer is the founding director of the company and a member of a New Jersey chapter of the National Stuttering Association (NSA). According to the NSA, more than 3 million American adults stutter. Stuttering is a disruption of the fluidity of speech, and while there is no cure available, early recognition and speech therapy can help. Although the specific cause of the condition is not known and is likely due to several factors, people who stutter are often thought to be intellectually and emotionally impaired, neither of which is true.

Ms. Filer met her fellow cast members through the New Jersey chapter of NSA. While none are professional actors, this is the second time that she, Sue Camlin and Lucy Reed have appeared on stage together, something neither would have dreamed of doing earlier in their lives. Sue Camlin is a retired prekindergarten teacher. In high school she was not allowed to perform in school plays because of her stuttering and had to work behind scenes helping with makeup. Lucy Reed is a speech therapist; she avoided a career that involved speaking in public or to clients. “It’s a label that individuals have a hard time overcoming,” says Lucy.

Sue wonders whether people will hang up on her when she calls once they hear her stutter. Telling jokes is impossible because people who stutter can have a difficult time with punch lines. Singing is easier, and the play features several songs for the group to perform together. Familiarity with the lines, focusing attention on memorizing the script, and patience with the pacing of the delivery all contribute to the success of the production.

The play’s ending involves a simple tweet about the “discovery” that brings customers back from the hip place across the street and rescues the business for Sue. Communicating easily via social media emphasizes the sharp contrast these actors face as they struggle to speak fluidly. Tweeting is one way of being heard, but still, nothing beats conversation. The cast of “…Last Night” knows that to be true.

The Absolutely, Positively, Forget About it, Last Night at Von Dahm’s Sports Bar, Wing Hut and Karaoke Palace, a one act play by Sean Grennan. For more information, please contact