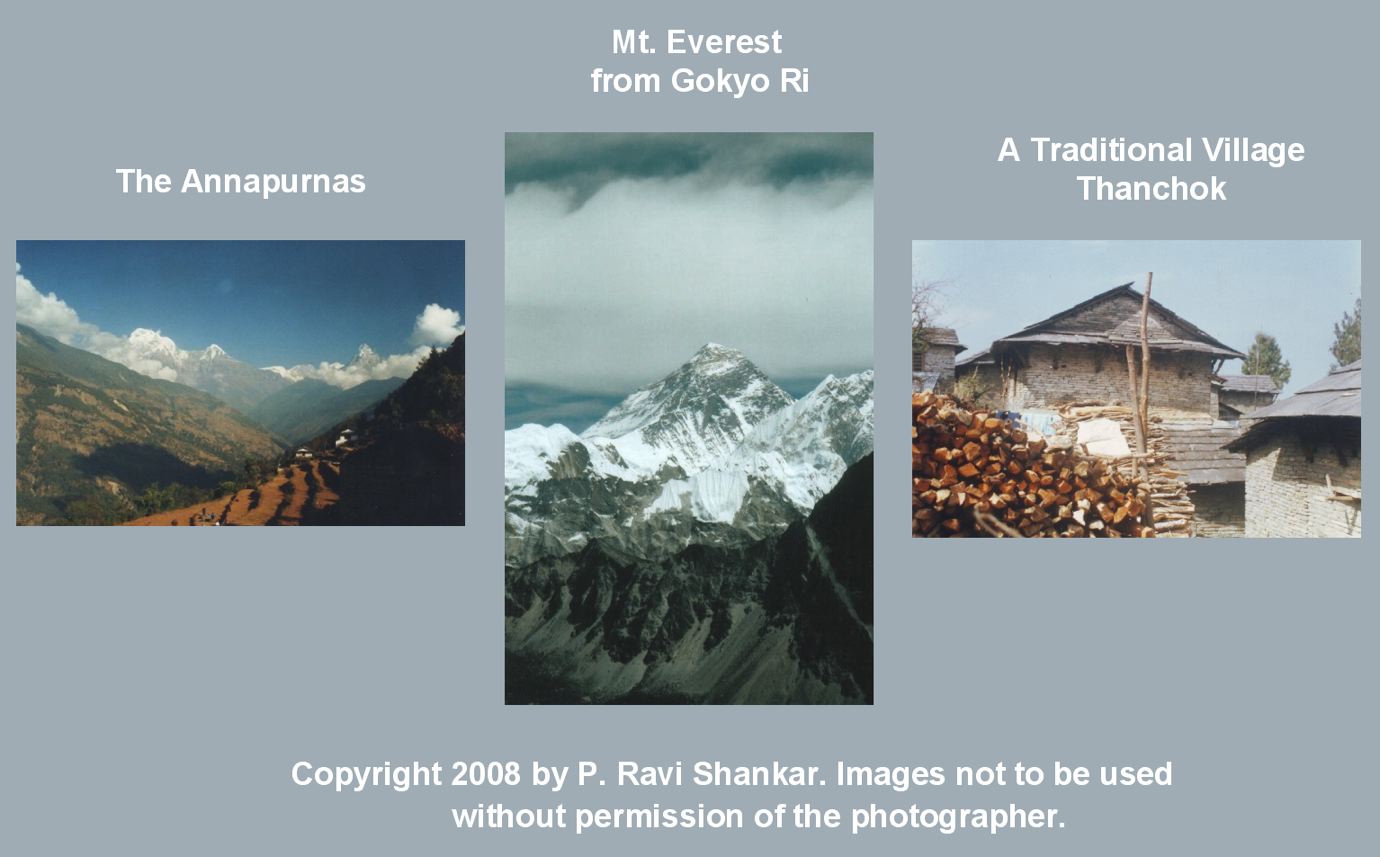 Nepal, a country in the lap of the Himalayas is still predominantly agricultural. The majority of the festivals and cultural events have a strong correlation with the planting and harvesting of rice, the principal crop. With the hard rocky soil and the lack of suitable flat land it is difficult to cultivate crops in Nepal. Agriculture like in most of South Asia is a gamble dependent on the vagaries of that great seasonal phenomenon, the monsoon. Adequate rainfall at the right time is the major determiner of whether the sown crops will yield a good harvest and can mean the difference between eating well and going hungry. I was taking a similar kind of risk with an initial voluntary Medical Humanities module in the Himalayan country. Whether I would be successful at the end of the day depended on a variety of factors, the chief one being the enthusiasm and interest of the participants.

It was early January 2007 when I came to know about the PSG-FAIMER regional institute in Coimbatore, India through one of my good friends. PSG is a charitable group who run a number of educational institutions in Coimbatore, India and FAIMER is the US-based Foundation for the Advancement of International Medical Education and Research. The institute was inviting applications for a part-time fellowship in Medical Education and was inviting an outline of curriculum innovation projects from potential fellows. I have always been interested in medicine from a ‘different’ perspective. I have a keen interest in the history of medicine and am also interested in literature and creative writing. I am a keen trekker and photographer and have spent many weekends and vacations in the delightful trekking areas of Nepal. Most of my contemporary fellows (mainly from India) had chosen projects well within the confines of the curriculum. However, I wanted to do something that pulled together my interest in history, literature, and art within the framework of medicine, something along the lines of what is called Medical Humanities in the west.” I discussed my proposed curricular innovation with Dr. SK Dham, dean of the Manipal College of Medical Sciences in Pokhara, Nepal, and he was very supportive. I decided to submit my project and hope for the best.

It was a delightful experience to receive the e-mail from the institute confirming my selection. The first on-site session was to be held in mid-April at Coimbatore and I set about working on the project. At Coimbatore we were taught about project planning, force-field analysis, concept maps and looking at the project in a structured fashion under various headings. The overall attitude towards my slightly novel project was positive though there were occasional suggestions to choose a more conventional subject. The food at Coimbatore was a delight and I could not have enough of idlis, dosas, upma and other South Indian delicacies.

Initial days of the project

On coming back to Pokhara I started work on my project in earnest. The first task was to obtain feedback from the stakeholders and design a curriculum. One of our faculty members at PSGFAIMER was Dr. Janet Grant of the Open University, United Kingdom and she was kind enough to send me material on curriculum design. For a long time I had been intrigued by a feature in the journal Academic Medicine titled ‘Medicine and the Arts’ (MATA). I wanted to contribute and wrote to Ms. Anne Farmakidis who was in charge of MATA at that time about how I should go about writing a MATA article. She gave me a few hints and was kind enough to send me a copy of the book titled Ten Years of Medicine and the Arts. The book’s a compilation of MATA articles published over the years from 1991 to 2001. The book was a delight to read and I was hooked! This book was also a key factor in strengthening my interest in the medical humanities.

Preparing for the module

The module I was planning was voluntary so maintaining participant interest was the key! I had noted that in many courses of study in South Asia the objectives are not clear. I resolved to put down the objectives of each session on paper in black and white. Ironically I ended up with clearer objectives for a ‘soft’ course like Medical Humanities than for courses like Anatomy or Pharmacology! I also set about constructing a student guide, a facilitators’ guide, a guide to further reading, and session descriptions. A major question in my mind was how many sessions should be conducted. I wanted the module to serve as an introduction to the fascinating topic of medical humanities. As part of the course I was in touch with my friends and faculty at the PSGFAIMER Institute through a listserv and we started discussing how to go about our respective projects. We also cover various topics related to health sciences education every month. As medical humanities is not well developed in South Asia I got in touch with various medical humanities educators from other regions through e-mail. All were gracious enough to respond and offer their suggestions. All wanted to help kick start medical humanities in a developing Asian country. I owe a special debt of gratitude to Dr. Johanna Shapiro of the University of California at Irvine, Dr. T. Jock Murray of the Dalhousie University Faculty of Medicine, Canada and Dr. Tom Tomlinson of the Michigan State University in US. My friend, Dr. Rakesh Biswas was also very helpful.

I finally decided to conduct fifteen sessions divided into three units titled Medicine and the Arts, Ethics and Medicine, and Contemporary Issues in Medicine. There were also home assignments. A major goal of the module was to make learning fun and avoid the heavy, boring didactic teaching which is in vogue in most of South Asia. Learning sessions were to be conducted in small groups and were to be activity based and interactive. Literature and art excerpts, role plays, case scenarios were among the different modalities used to explore various aspects of the humanities. Medical humanities was not widely known and it was up to me to popularize the term and what it meant. MCOMS has two campuses with the basic science campus being located at the scenic and wooded Deep Heights in Pokhara. The students run a wall magazine called Vibes and I often contribute to this delightful magazine. (A wall magazine is like a notice board and various articles and features are put up on the board. The contents are changed regularly and a particular collection of articles and features constitutes an issue.) I wrote an article about medical humanities for Vibes.

For the module I mainly used literature and art excerpts from a western context. I was able to use a couple of excerpts from South Asian authors in the module. Photos of the violent conflict in Nepal were used and the majority of the participants could easily relate to this. A major difference between America and Nepal is that in Nepal, like in most of South Asia the student-teacher relationship is authoritarian and hierarchical. I had to make sustained efforts to get the students to open up. The case scenarios and role-plays were designed by me to reflect various aspects of the practice of medicine in Nepal and south Asia and were well received by the participants.

I started canvassing support among the students of the clinical semesters. In Nepal the undergraduate medical course is of four and half year duration and is divided into nine semesters. The first four semesters are devoted to the basic science subjects and the last five to the clinical ones. Initially I concentrated on the fifth semester as the students had just entered the clinical phase and were the most ‘free’ batch of learners. However, the fifth semester also runs a program to help the poor patients of the hospital — the socially aware and active students were active in the poor patients’ fund and had no time for medical humanities. I then turned my attention towards the sixth semester. I started canvassing among faculty members to join. My colleague, Subish is keenly interested in the more rational use of medicines and other issues as well; he enthusiastically participated in the module. He was instrumental in providing the excellent facilities of the Drug Information Center Conference room for the sessions. The room helped to create a relaxed, protected and comfortable atmosphere.

Initial days of the module

The initial sessions were a touch and go affair. People kept coming to the sessions and dropping out. Some of them were irregular in attendance, attending scattered sessions. Gradually word spread about the unique module. Participants started coming and staying! A sixth semester student came to test the waters; she found it was to her liking and more of her friends joined. One of my colleagues, a physiologist, trekker, artist, photographer and many other things besides was an enthusiastic participant. My clinician friends were generous in sharing their rich clinical experience as co-facilitators. Another colleague had done his doctorate in Denmark, where, as in most of Europe, it is expected that medical and other health science students know some philosophy. With his help I started a ten minute discussion on philosophy during the module. One of my students then in the final year of medical school asked me to contribute an article about medical humanities for the college magazine, Reflections which they bring out.

Sessions for the Basic Sciences

The students in the Basic Science campus requested me to conduct a module for them. It was difficult to find a time period convenient to both the parties and finally we settled on the lunch break. It was indeed gratifying to note the enthusiasm of the participants. This module was conducted along the same lines but each session was divided into ‘bytes’ spread over three working days.

Novelties of the module

The module introduced a few new concepts and also further developed certain others which I had been using in my small group sessions for students. Constructive formative assessment, reflective writing assignments, assessment of the facilitator and faculty and students learning together were a few of them.

At present I am conducting a module for faculty members at the KIST Medical College and these members could be used as co-facilitators for future sessions. I really enjoyed being a part of Humanities 101 and I am sure my student and faculty participants did too. I sincerely hope the seed of medical humanities will take root in the fertile soil of Nepal (among the highest countries on Earth) and bloom among young, energetic and impressionable minds!