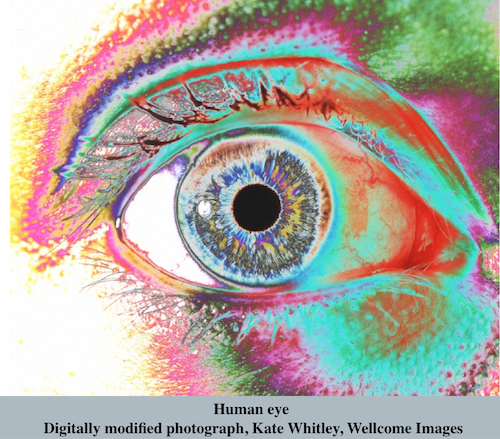 Described as a “free destination for the incurably curious”, the Wellcome Collection in London consists of several galleries, a café, bookstore and library. The library houses “collections of books, manuscripts, archives, films and pictures on the history of medicine from the earliest times to the present day”. I knew that this particular library’s holdings would be an invaluable resource for my research in the medical humanities, so I decided to pay the Collection building a visit, soon after I arrived in London this January. I was doubly interested because the Wellcome Trust, established by Sir Henry Wellcome’s will in 1936 and meant “to advance medical research and understanding of its history”, funded the Centre for the Humanities and Health at King’s College London, where I hold my current position as postdoctoral research fellow.

I enjoyed the Wellcome Image Award gallery, which displays winning medical and historical images made by light and electron microscopy as well as illustration and photography. But I was perhaps most forcibly struck by “Medicine Man: The forgotten museum of Henry Wellcome”, which exhibits objects from Wellcome’s personal collection. Sir Henry was apparently a dedicated gatherer of medical and anthropological artifacts and curiosities. Amongst the assortment are forceps, chastity belts, ceremonial masks, early surgical instruments such as bone saws, and even torture chairs. I found myself thinking of the exhibit for a long time afterwards. Imagine the research that could be done, and no doubt already has begun, on each of these object’s long, fraught histories, and what such research tells us about a culture’s values, practices, even aesthetics. Because I found certain objects disturbing, I also felt responsible to pay even closer attention to what they had to teach me–about medicine’s relationship with gender and race, as well as about common human experiences of birth, death, pain, suffering, and healing. I wished I had a medical doctor, artist and social scientist, amongst others, standing in the room, contemplating with me this window into complex and often troubling moments of human history.

Though I was alone at the Wellcome Collection itself, I am in the fortunate position of being able to participate in just such meaningful discussions in my role as Wellcome Research Fellow. I am part of a multi-strand program called the “Boundaries of Illness”, convened in the Centre for Humanities and Health here at King’s College. I work within a strand of this program titled “Nursing and Identity: Crossing Borders”. For my project, I will examine the lifewriting of nurses traveling in the late nineteenth and early twentieth centuries under the auspices of the Colonial Nursing Association. I will analyze their work in terms of its implications for medical history, literary, postcolonial, gender and travel studies, and help to write a database for future researchers. To the research team at King’s College, I bring a background in literary studies. I received my Ph.D. in English literature from University of California, Davis in 2007. My own work has been concerned with racial science and climate in nineteenth-century travel narratives. I applied to the research fellowship at King’s partly due to my own long-standing interest in interdisciplinary scholarship and colleagueship. For example, while at UC Davis, I co-organized a medical humanities research group with Faith Fitzgerald (Internist and Professor of Medicine and Associate Dean of Humanities and Bioethics), and we also hosted two conferences on “Literature and Pathology.”

Through these experiences, I have found that being part of an interdisciplinary scholarly community can enhance my own work in both tangible and intangible ways: on a pragmatic level, I produce better honed research when I analyze my arguments from alternate perspectives, testing the validity of my assertions outside of my own discipline. I may follow up leads provided by my colleagues that will take my work in new and creative directions. I also use research methodologies drawn from various academic traditions. Less measurable, but still critical to my work, are the interpersonal benefits: I find myself energized and encouraged when surrounded by scholars who have chosen this kind of study–speaking generally, I find that they tend to be more willing to explicitly discuss the ethical implications of their research, or even the underlying ideals and values they hold, such as human connection, compassion and understanding. Specifically, many of us in the interdisciplinary field of medical humanities believe that it is only through a meeting of the minds between biomedicine and other fields such as literature, art, philosophy and history that we can understand the experiences of patients and providers of care (roles that almost all of us will inhabit at some point in our lives). The Centre’s website says it well: “Patient subjectivity and values – sometimes bundled together as ‘the patient voice’ – are expressed in a wide diversity of cultural objects and settings (texts, symbolic figurings rendered in portraits, films and in conceptual constructions), which it is the task of the Medical Humanities to identify, research and illuminate” (http://www.kcl.ac.uk/research/groups/chh/about.html).

As I have stated that I value my colleagues’ diverse perspectives and the collaborative quality of interdisciplinary research, it would be remiss of me not to include the experiences of some of my King’s coworkers. Dr. Rosemary Wall began her post in 2007, and so has seen the Centre develop through the stages of proposal, planning, and now implementation. She mentioned that it has been rewarding to help bring together scholars from within King’s College and from other institutions who have common interests and complementary training, but may not have known each other or had the opportunity to share their ideas before (personal interview 2/4/2010). Ms. Elisabetta Babini asserts that, while “commitment to Medical Humanities” is “highly challenging”, the field also has great potential to “broaden traditional research horizons.” Both of my colleagues discussed the rich professional opportunities provided by their work in the Centre. As just one example, they are currently co-planning Screening the Nurse: Call to Service, a two-day event of talks and film screenings organized around the theme “British Nurses and Wars”, hosted by the Florence Nightingale School of Nursing and Midwifery at King’s College in collaboration with the Imperial War Museum film archive (e-mail interview, 2/7/2010). These kinds of projects offer researchers in the medical humanities unique venues and opportunities through which to broaden their professional network and gain valuable cross-disciplinary experience, as well as to make their research accessible to the public. I am very pleased to have joined with the Centre in supporting its initiatives. Further, I look forward to sharing in the future some of my findings regarding nurses’ writing, which I agree, with recent commentators Cortney Davis and Thomas Long, is a topic of ongoing interest.

2 Within the “Nursing and Identity” strand of this project, I am supervised by Professor Anne Marie Rafferty, Dean of the School of Nursing and Midwifery, and Dr. Anna Snaith, Reader in Twentieth-Century Literature. My co-researchers include Dr. Rosemary Wall, postdoctoral medical historian, and Elisabetta Babini, Ph.D. student in Film Studies/ Nursing, who both kindly agreed for me to include their comments.