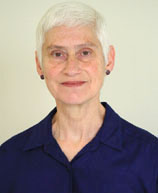 Felice Aull founded the Literature, Arts, and Medicine Database in 1993.  She retired as editor in chief on January 1, 2011. From 1966 to 2008 she was a full-time faculty member in the Department of Physiology & Neuroscience at New York University School of Medicine. Her Ph.D. is in basic medical sciences (specializing in physiology) from Cornell University's medical college. She began to discuss fiction and poetry with pre-medical and medical students at NYU in the late 1980s and in May, 2001 she was awarded the M.A. from New York University's Graduate School of Arts and Sciences, where she studied in the John W. Draper Interdisciplinary Master's Program in Humanities and Social Thought. She taught electives and seminars in medical humanities, is a contributing editor of the journal, Literature and Medicine and is on the editorial board of Bellevue Literary Review. Her research and teaching interests are borderland and exile states and disabilty studies. She is a published poet whose collection, Mandatory Evacuation Zone (2017), was nominated for a Pushcart Prize.