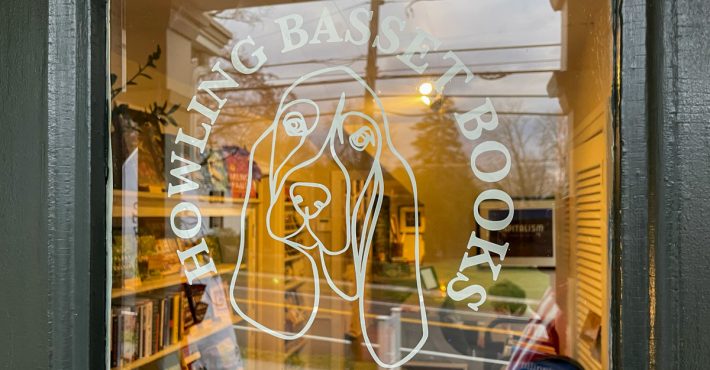 Zohar Kfir and Lisa Lynch recently opened Howling Basset Books in an old Victorian house in Oldwick, New Jersey.  In a recent conversation, we spoke about the joys and the challenges of running a brick-and-mortar bookstore in this age of screens and e-books. 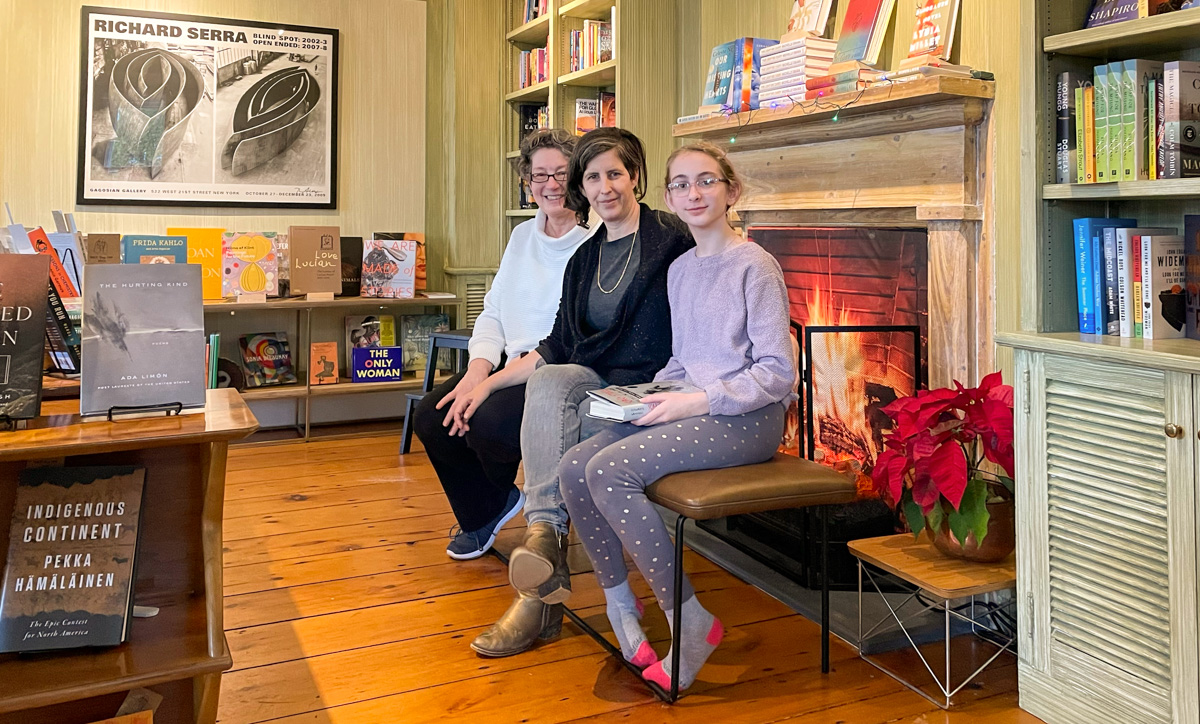 LB:  What prompted you to open Howling Bassett books?

L: In 2008, Zohar and I almost bought a bookstore that was for sale in Red Hook, Brooklyn.  We got very excited about it, and when that didn’t work out, the idea stuck in the back of our minds. When we moved back to rural NJ last summer, we decided we wanted to be more involved with the local community.  Since there was no bookstore in the area we came up with the idea of creating one in the hopes that it would serve as a cultural gathering space.

LB: How would you describe Oldwick?

Z: Oldwick is in Tewksbury township, a rural community an hour west of Manhattan.  It is really beautiful out here, mostly preserved farmland and horse farms. The houses are spaced far apart and often removed from the road, which creates a different way of living and socializing.  It’s very traditional in some ways.

L:  There’s been a lot of turnover, though, especially after the pandemic.  A lot of younger families have moved to the area.

Z: Oldwick itself is a very small town with a general store, a post office, a couple of good restaurants, a few small businesses and a church. When we saw the space that was for rent, we just fell in love — it is the first floor of an old Victorian house and was a bookstore in the 90s. Some of the shelves were already there, and it just felt right.

LB: You were new to bookselling.  How did you get started and break into the business?

Z: Lisa started to research how to start a bookstore.  We joined a lot of listservs of indie booksellers to figure out the lay of the land, and we joined the American Booksellers Association.

L: Booksellers are a very helpful community. It’s a very knowledgeable and supportive group of people.

Z: When we opened, we got so many emails from bookstores all over the country, congratulating us and offering help and resources.  For example, I had some problems getting the inventory database, which had close to 2000 titles, into Square, the payment management system we use.  One member of the Facebook groups immediately emailed us set up a zoom call, screen shared, and showed me exactly how to do it.

LB:  How did you generate the first inventory list?  Two thousand seems like a lot of titles for a small store.

L: When you start a bookstore, you usually do something called a ROSI, a recommended opening store inventory, that you work out with a distributor.  You give them your information and your demographics, and they come back with a list which I found useful because it made me think in terms of categories. I probably rejected half of the list, and then, based on my own research and reading publishers’ catalogs, I built a revised list based on books I could recommend.

Z: We’re still curating an interest list for the community, while trying to figure out the likes and needs of the community. We carry a lot of nature books, books on horses, cookbooks, and gardening.

L: But at the same time, there’s a lot of popular genre fiction that moves well in other places that hasn’t been moving in our store. And so, we’ll see if that changes over the holidays.  Romance is considered to be the biggest fiction genre, but I’ve sold one romance book since we’ve been open.

Z: Same goes for mystery and sci fi, they have not been very popular either.

L: Every time we have some downtime in the store, I start educating myself in those genres, because I know that going forward, I need to know much more about them.  Literary fiction is my specialty and that takes up one whole wall and  has done well.   I’m also good with cookbooks which are selling well.

L:  I select nonfiction, social science, politics. And then we both do art.

Z: It’s been nice to see people come to the store and really appreciate our book selections, especially the literary fiction. Many people comment on how well-curated the bookstore is.

LB: There has been a lot of debate recently about banned books.  Have you encountered any controversy?

L: There’s such an antagonistic atmosphere right now in a lot of places that retailers are getting more cautious about carrying titles that might cause controversy.  I heard about a lawsuit against Barnes and Noble for carrying Gender Queer, for example, which is a book that we carry.  I recently attended a panel on in bookstores, where booksellers talked about incidents with people who come in and attack the booksellers, take books off the shelves, steal books that they don’t want in the bookstore.

LB: Have you had any people coming in who ask why do you have this book?

L: We have the sign on the front door that remained from the banned books promotion that says, we sell banned books. One guy came in who was a libertarian and said something like, I don’t believe things should be banned, people should be able to do what you they want and then he said, you know, but the problem is that in the schools, they’re trying to indoctrinate kids or legislate how they think. Right? And so, he was kind of turning that argument on its on its head. So, I didn’t really engage with that too much. But he wasn’t being too antagonistic.

Politically, this area is red, and purple at best. We know that. Naming the store Howling Basset Books was a way to put, I would say, a friendly face on a bookstore that was maybe going to carry books that people might not like.  I think if we called our bookstore something like, Radical Feminists, we would have been seen differently in the community. It seems that it was a good strategy.

LB: How did you come up with the name Howling Basset Books?

Z: We have a basset hound, Stella. It’s our second Basset. We were driving with our 11-year-old daughter, and we started throwing names in the air. Howling Bassett Books emerged, and it just felt right. People also commented how it sounds like a British pub.

L: This is a very dog crazy area. And, in fact, we have hunting bassets around here called the Tewksbury foot bassets. Now we have people coming in just to meet the dog. We even had someone call to ask if Stella is there in advance of their visit.

Z:  Stella has a whole Instagram fame section. People come in and pet her and upload stories about her. She’s a good mascot to have.

LB:  Since we’re living in an age of screens and ebooks, I wonder whether people come in, look at your titles and then go home and put them on their Kindle.

L:  It’s interesting because there are a lot of booksellers that are incredibly purist about that. They won’t carry certain titles if they are marketed as being available on Amazon. That’s not a battle you can win.

Z: We’ve had so many instances of people coming to the store intentionally just to shop. There was a family that arrived to show their children how a bookstore looks.  They had never been to a bookstore.  They were surprised that they could buy a book and keep it forever.

My favorite was woman that came in with her baby, and she told me that she was about to order a book for her book club—it was already in her cart—and she told herself, “No, you’re going to get in the car right now with the baby and drive over to the new bookstore”. And she did. And I told her, this is the exact reason that we are here. It made me so happy.

LB: Is it a challenge to keep current with your inventory?

L: We’re constantly buying books.  When we started out, we under bought because we didn’t want to have an oversaturation. There’s only one distributor left in the country, and they give you one chance to return from your opening store inventory. And then after that, you can return 10% a year. If you work with publishers, you can return much more of the inventory. So we have a growing pile of books that we’re going to send back for that one return; we have a six month window.

LB: What have been your bestsellers so far?

L: Funnily enough, a book on a garden in Stockton, NJ, called The View from Federal Twist.  And then we’ve sold a fair number of the new Celeste Ng book, Our Missing Hearts. There’s also a graphic novel on Hilma AF Klimt.

Z: It is really beautiful, and people just snatch it up. So that was unexpected. And for the kids, there’s a book called Creepy Crayon that disappears every time.

L: I can’t get it in stock. Every kid has heard of it. It’s a series.  There’s Creepy Underwear, Creepy Carrot. And this one’s Creepy Crayon. They’re actually interesting and thoughtful.

Z: You know, Colleen Hoover is the number one best-selling author in the states. Her recent book came out last week, and everyone ordered like 50 copies and sold them immediately.

We only sold one copy and none of the other Colleen Hoover’s have sold. Other bookstores were celebrating “Colleen Hoover days” to mark the novel’s release, but for us, that falls into the mass market genre that’s not really moving as fast.

But if someone comes in and asks for a book and we don’t have it, then a lot of time I’ll get it, because I figure that if there’s one person requesting it, then there might be more. I’ve learned about so many different authors that way, for instance, William Kent Krueger. He’s a popular mystery writer whose books focus on the West. Someone came in and asked about him, and I thought I should know about him. I got his new book, and then I got an older book of his because it seemed that it was a hole in in my understanding.

LB: What’s the last great book that each of you read?

L: I think Our Missing Hearts was great. I really liked that book. I think would be at the top.

Z: And I loved Five Tuesdays in Winter by Lily King, a collection of short stories. It is so well crafted.

LB:  Looking ahead, based on your experience to date, what do you anticipate in the coming months?

Z: It is really a work in progress. We jumped in not knowing what was ahead of us.

We are constantly learning how we want to shape the store, what events to host and how to foster community around it. We’re taking a bookseller class, and we are learning a lot from that and communicating with other indie bookstores. It’s an ever-changing landscape as we figure out who we are as booksellers.