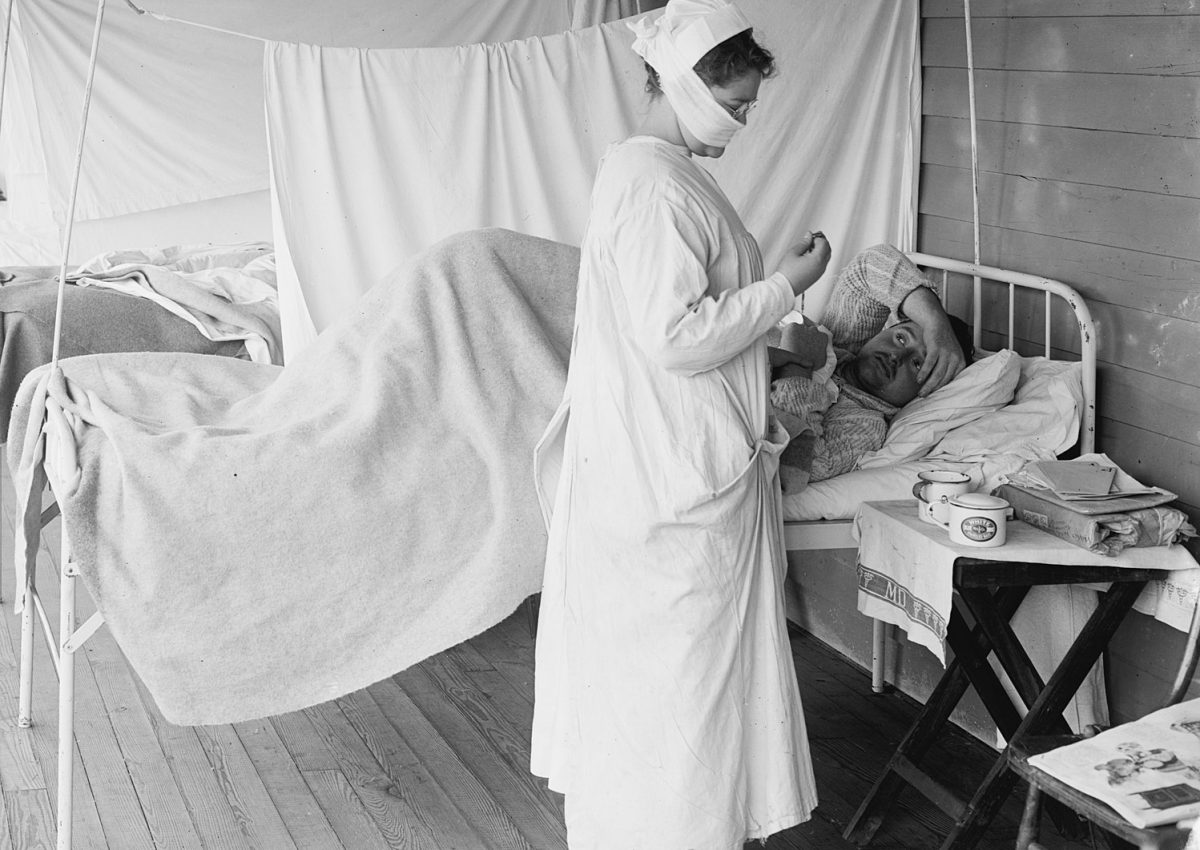 The news each day is filled with the casualties of the Covid-19 pandemic. It brought to mind a description I wrote of the “Spanish flu” in my novel, “Henderson’s Equation.” This excerpt captures for me what is happening at this time.

“My time spent in the army now seems to me like a long, complex dream. The events are all familiar, but you cannot be sure whether they really happened. After a very brief period of basic training in New Jersey, I was stationed in South Carolina as a physician at a small army base. The base had once been a private boys’ school but had been unoccupied for several years before the mobilization began. Almost overnight, the large gymnasium and lecture halls had been converted into barracks with beds and footlockers that would accommodate more than five hundred recruits. The once manicured playing fields became parade grounds for marching, and instruction in the use of rifles and bayonets. With carved figures over the entrances to some of the buildings and the paths leading to secluded groves with carved benches and small ponds, the base retained many of the qualities of an elite prep school.

My quarters, in what had been the faculty club, served to house the officers on the base. As the only physician, I had a room to myself, although I had my meals in the mess hall with the recruits. The officers with whom I shared quarters were all career army men and had little to say to me. The recruits, most of them ten years my junior, were intoxicated by their intense training, and hardly knew I was there.

Young men from all over the Northeast and parts of the South passed through this base to receive their brief training, which consisted mostly of learning military discipline and how to fire a rifle and to kill. I was surprised by their excellent health and by their zeal that already seemed to have attained a new level of brutality with just the introduction of machine guns and mustard gas.

During the first few months, most of my time was spent doing routine physical examinations and treating minor illnesses and injuries incurred during training. Each week more young men boarded troop ships headed for France. There was a strong sense of camaraderie among them as they boarded the drab, gray troop ships singing, “Over there, over there, the Yanks are coming.” News of the progress of the war came slowly from reports by correspondents in France and Belgium, but the reports were optimistic. I was isolated from the horrors related by soldiers returning home from the front. Casualties of the war were treated in field hospitals and then moved to larger army hospitals in France before sailing back to America.

In September I returned to New York to celebrate the Jewish New Year with Clara and our families. It was a warm and happy time. In fact, the photograph on my desk, now more than sixty years later, shows Clara, radiant, standing next to me in my uniform. Wanting to remain in New York as long as possible, I took an all-night train back to my base, arriving at about six in the morning. I walked the two miles from the train station to the base on that lovely, cool morning with the first hint of autumn in the air. I could easily see myself as a teacher in this exclusive boys’ school, returning from Thanksgiving vacation. The gate at the entrance to the base stood open, which was unusual, and a strange silence hung over the place. Then, walking along the gravel path that led to my barracks, I saw the large wooden boxes lining the road. Coffins, empty coffins, not for casualties from the battlefields of Europe, but for victims of influenza, the “Spanish flu.” It had taken a heavy toll in Europe and now there were rumors that it had appeared at an army base outside of Boston. With devastating speed, the epidemic had struck my base during the four days while I was on leave. The base was totally transformed. I reported to the commanding officer asking what I was expected to do. There was disdain and frustration on his face. “You’re the doctor, you figure it out!”

I had never faced an illness like this flu. No one had. I had little time to think. I had to act. I organized teams of healthy men to help with those who had already fallen ill. Young healthy men experienced fever and muscle aches, followed by a dry, hacking cough and within twenty- four hours or less were struggling to clear their lungs of frothy, blood- tinged secretions. Each night almost half of the men in our infirmary died. I did not sleep for the next three days while we set up a large isolation ward to care for the victims. We placed the cots close together, head to toe, believing that flu was probably spread by coughing. We strung bed sheets on makeshift hangers between cots and issued face masks to everyone on the base. There was no treatment for the men who were already short of breath. We could do little more than watch as they turned blue from lack of oxygen, gasped for breath, and died. I had to work hard to suppress the thought that I was not different from all the young men I saw dying daily. And yet, every day more healthy new recruits were arriving at our base. The epidemic was taking a great toll. How could they send new recruits here? We were already overcrowded; we had no place to care for the sick. Anger mixed with my despair and helplessness when the commanding officer responded, “Doctor, we are fighting a war over in Europe. What do you think we should do?”

Outside of our small army base the epidemic spread. Whole communities and cities reacted with panic. The pine boxes filled with bodies were put on trucks and taken to the railroad station in the nearby town. It was a small station, but the army had arranged for a special train to transport the coffins back up North where they would be buried at an undisclosed site. I felt that it was my duty to accompany the convoy of five trucks that set out, each loaded with flag-draped coffins. I was in the last truck as we drove out of the base, past the frightened and bewildered soldiers, and began the trip to the station. This was a rural area. We passed small farms and one-street towns. I thought I saw a couple wearing face masks standing alongside the road. The general store in the small town had a hand-lettered sign that read, SPIT SPREADS DEATH.

I didn’t understand why our convoy slowed down and halted. I got down from the truck and walked ahead to where two of our sergeants were stopped by a small group of townspeople, rifles in hand, carrying signs that read, NO INFLUENZA ALLOWED. After a heated discussion, they agreed to let our trucks proceed to a secondary road, which crossed the railroad tracks. The train would stop at a siding to take on its cargo of coffins. I was relieved. It was not simple for these worried citizens to stand up to the U.S. Army, but they were not alone in their fears of the epidemic that was spreading like wildfire across the countryside.

And then, several months later, as suddenly as it started, the worldwide epidemic ended. They say twenty-one million people died. The photographic image of waves of Americans marching through the streets of San Francisco celebrating the signing of the armistice, all wearing white face masks, is etched indelibly in my mind to this day.”

Jerome Lowenstein, M.D is the Founding Publisher of the Bellevue Literary Press and the Nonfiction Editor for Bellevue Literary Review. In 1979 he initiated the Program for Humanistic Aspects of Medical Education at New York University School of Medicine, which has become the model for many other similar programs at medical schools across the country. He is the author of Henderson’s Equation, The Midnight Meal and Other Essays about Doctors, Patients, and Medicine, and Acid and Basics: A Guide to A Guide to Understanding Acid-Base Physiology.