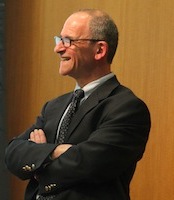 On May 6, 2014, Barron Lerner, MD, PhD, kicked off the Lerner Lectureship series with a talk that explored the evolution of medical ethics through the lens of his father’s and his own practice of medicine. Dr. Lerner’s father, Phillip I. Lerner, MD, was “a revered clinician, teacher and researcher who always put his patients first, but also a physician willing to ‘play God,’ opposing the very revolution in patients’ rights that his son was studying and teaching to his own medical students.” The talk built upon Dr. Lerner’s new book, The Good Doctor, which touches on issues of patients’ rights, autonomy, generational friction, and the remarkable bond between father and son.

Below, Dr. Lerner discusses some of his father’s unique stories and what it means to be a “good doctor.”

The Lerner Lectureship is generously supported by Sam Miller, a grateful patient of Dr. Phillip Lerner.

Why did you write The Good Doctor?
There are several reasons. First, when someone is a historian of medicine and had a father who kept copious journals about his career as a physician, it is hard not to imagine fashioning this information into a book. Second, including medical school, I have now been in medicine for thirty years. To the degree that I have achieved some wisdom, I figured it was the time to reveal it. Third, my agent, Robert Shepard, has been trying to get me to write a trade book forever. So I finally succeeded. Fourth, and most important, the book is a tribute to my father, who I believe exemplified what it means to be a “good doctor.” It is a taller task these days, but one I think that those of us in medicine should try to embrace.

What did you learn about your father from his journals and your other research?
The main “finding” about my dad’s career was how he felt it was his duty, having mastered the scientific literature and learned as much as possible about his patients’ lives and values, to make the right clinical decisions for them. This made him an unabashed paternalist and someone who, in certain circumstances, was even willing to mislead patients to get them to do the “right thing.” As his career progressed, and bioethics and patients’ rights emerged, he begrudgingly began to incorporate some of the new dogma about informed consent into his practice. But he remained strongly opposed to the reflexive use of algorithms and the practice of giving patients menus of diagnostic or therapeutic options. He believed that these approaches were not congruent with the true practice of medicine.

What were some of the most interesting stories you discovered?
Well, I guess you could say there were good and bad ones. One of my favorites was the time that my father got an elderly Orthodox Jewish woman to agree to an open lung biopsy by getting one of his infectious diseases buddies, who was a devout Catholic, to do a consultation on the patient. When this doctor took out his rosary to pray for the woman, she could not say no. In another case, my dad not only diagnosed meningococcemia, a severe bacterial blood disease, at a patient’s home, but deduced that she had recently been playing tennis by the fact that the rash was worst in the area of her right forearm.
On the flip side, there is the story that starts the book in which my father placed his body over a recently-deceased patient to prevent his colleagues from resuscitating her. As the patient did not have a DNR order, this violated both the legal and ethical standards of the day. He also tried to get doctors and nurses to give both of my extremely-ill grandmothers enough morphine to get them to stop breathing. But even in these instances, my dad was acting according to his fervent beliefs about what it meant to be a compassionate doctor. After preventing the CPR, he wrote that he had acted based on his “30+ years as a physician responsible for caring and relieving the pain of my patients who can’t be cured.”

What lessons do your dad’s and your medical careers reveal for future physicians and health care reform?
I would first point out that there is no going back to the paternalism of my dad’s era. Patients’ rights are here to stay. Plus, modern doctors do not have the time to practice the intensive, patient-centered care that my father did. But there are ways in our modern system to replicate some of what my dad did and stood for. There is a bit of a backlash against patient autonomy, for example. Patients may be quite willing to take advice from physicians that they know and trust, even about end-of-life issues. And although office visits may be only 15-20 minutes, it is still possible to spend a few minutes discussing what is going on in a patient’s life. I like to write down what we discuss in my notes and bring it up at the next visit. And the doctor-patient relationship does not only have to occur via face-to-face encounters. Innovative programs are using phone calls, Skyping and e-mailing to allow busy physicians to stay in better touch with their patients.