Skip to content
New Articles
Interview with Carla Joinson, author of Vanished in Hiawatha: The Story of the Canton Asylum for Insane Indians.
Interview with Jim LeBrecht, co-director of Crip Camp
Current Topics

On September 23rd, 2019, the Masters Scholars Program in Humanistic Medicine hosted a film screening of a recent documentary, Survivors, which chronicles the efforts of West African communities to contain the rapidly spreading and highly lethal Ebola virus outbreak which began in late 2013. The West African Ebola virus epidemic ravaged the countries of Guinea, Sierra Leone, and Liberia, infecting tens of thousands of people and killing nearly half of all those who were infected. Though much was made in the American media of the four isolated cases in Texas and New York City, Survivors focuses on the ground effort in Sierra Leone, organized and undertaken by everyday citizens fighting back against an existential threat.

This year, Survivors was nominated for an Emmy award for “Outstanding Social Issue Documentary”. In advance of the Emmy Awards Ceremony on September 24th, the directors and producers of the film graciously offered to attend the film screening and answer questions afterwards. This included Arthur Pratt, the director of the film, Banker White, co-director and producer, along with Lansana “Barmmy Boy” Mansaray, director of photography.

Attendees from the NYU School of Medicine, affiliated hospitals, and NYU downtown campuses streamed into the beautiful lecture hall of the Science Building, where the screening was to be held. After a brief introduction from Lucy Bruell, editor-in-chief of the LitMed Magazine and LitMed Database, the event was underway. The audience watched intently as they heard the story of the Ebola crisis, as told by ambulance drivers, healthcare workers, children, and worried family members. There were laughs, there were tears, and as the end credits rolled, there was thunderous applause.

A discussion of the film took place after the screening, moderated by Shawn Thomas, third-year medical student and contributor for the LitMed Magazine and Database, where he had previously published an annotation of the Survivors documentary. Mr. Pratt began by describing his motivation for creating this film, which was to correct what he felt was a widely held misconception that the African people were simply waiting around for the international community to come save them. In contrast, he praised the efforts of the native Sierra Leonians who battled the epidemic, often in spite of interference from international aid organizations. He also spoke at length of how this crisis threatened the “foundation of what it means to be an African”, in the sense that the precautions required to prevent transmission of the disease fundamentally changed how people interacted with each other. Handshakes and hugs were suddenly forbidden, and religious rituals, especially concerning the handling of dead bodies, were upended as the epidemic advanced through the region.

The panel went into detail about the individual stories that were told through this documentary. In particular, they elaborated on their decision to focus on Mohamed Bangura, an ambulance driver who they felt exemplified the character and fortitude of the Sierra Leonian people who sacrificed their well-being for the good of their fellow citizens. In one scene of the movie, Mr. Bangura offers to suit up in protective gear himself in order to bring a disabled man down from the top of a hill. In an emotional scene, Mr. Pratt praises Mr. Bangura, saying “We don’t have Spiderman, or Superman, or Captain America. Our heroes are the people who make sacrifices that we can see.” 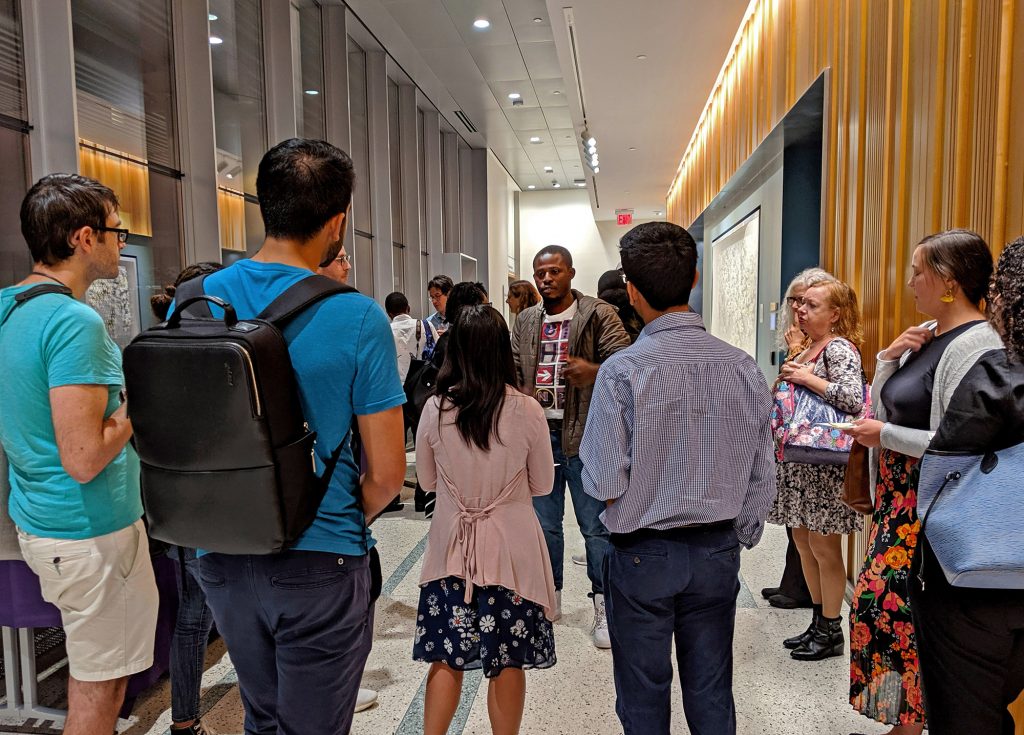 Mr. Mansaray and Mr. White provided an overview of the logistics of filming an ongoing public health crisis. In particular, they explained how the decision to use handheld cameras for filming was a deliberate attempt to recreate the chaos and urgency on the ground in Sierra Leone. Their insights gave the audience an appreciation of the challenges of this type of project, from border security, to hospital safety regulations, and even the etiquette required in approaching village leaders for permission to film in their communities.

After the conclusion of the event, the panelists continued to talk with attendees over refreshments. Mr. Pratt himself was seen presiding over a small group of his own who were eager to hear more about his work and vision for future projects.