Editor’s Note: This is the second of four installments from guest blogger Dwai Banerjee, a doctoral candidate in NYU’s department of social anthropology. Images illustrated by Amy Potter, courtesy of Cansupport.

However, at this point, Shambu and Rohini’s story took a sharp turn. The palliative care team I was visiting with discovered that, partly because of not collectively acknowledging the extent of the disease, Shambu and Rohini had started visiting a new neighborhood private ‘ayurvedic hospital.’ This hospital claimed to be able to completely cure cancer, provided that the patients pay whatever was the breaking limit of their financial ability. Perfectly aware that it was not her place to recommend or dissuade a line of treatment, the counselor restrained her own opinions. As the family talked, it became clear that to avail this therapy, they were considering risking their son’s future as well as their ability to remain in their home. Shambu had been the sole breadwinner in the family, and given the imminent possibility of his passing, such decisions could have catastrophic consequences. The counselor still remained non-committal on the viability of this promise of cure, but skillfully urged Shambu and his wife to talk and think through what they were doing. 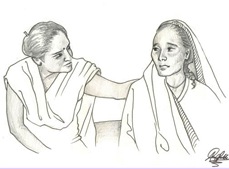 Soon, as they talked about their options for the first time, Shambu and Rohini started complaining bitterly about the treatment they had received at this hospital. The self-purported physician had refused to come into contact with the patient, or even take a medical history. Instead, their conversation had revolved around the staff ascertaining what the family could afford. (The counselor was to later tell me that many such ‘alternative’ hospitals had sprung up around lower-income neighborhoods, and for the urban poor at the margins of an overcrowded public health system, these were unsurprisingly seductive lures.) Soon afterwards, Shambu began to narrate his own life, telling the story of how he had planned his own insurance policies based on an astrological prediction that he would contract cancer, but how that prediction had fallen short by two years and wrecked havoc with his plans.

To my surprise, I began to see how the counselor’s decision to listen patiently had allowed the space for these narratives to develop, and how the family now began the slow process of coming to terms with the prognosis. This would certainly not be the last word on the matter, but the team’s skilful handling of the sensitive ways in which illness knowledge circulates ensured two vital things. On the one hand, they were careful not to heavy-handedly tear the web of careful ruses that continued to bolster the family and the relations between them and the social worlds around them. But at the same time, they laid the groundwork so that these partial denials would not financially ruin the family in the near future. Thus, the team facilitated the process through which Shambu and Rohini could place the illness within a comprehensible narrative of their lives, while beginning to prepare for what was to come.