Editor’s Note: This is the first of four installments from guest blogger Dwai Banerjee, a doctoral candidate in NYU’s department of social anthropology. Images illustrated by Amy Potter, courtesy of Cansupport.

The contemporary landscape of healthcare in Delhi inspires very little confidence. The lack of public insurance, scarcity of resources and rising cost of care in the vast network of private hospitals has ensured that for much of the city’s poor, the diagnosis of cancer comes without any hope of treatment. Even at the best public health institutions, waiting lines for chemotherapy extend for months, compounded by the fact that over 80% of patients present at incurable stages. In the four-part entry that follows, I show that palliative care –far beyond its commonplace association with comfort at the end of life – is an urgent, irreplaceable and imaginative intervention that seeks to both diagnose and treat the social costs of the disease amongst the urban poor in India. I show that in its understanding of the form of the worlds that both collapse around and emerge through the disease, palliative care is really the condition and prerequisite of therapy, rather than its failure.
The anecdotes here come from a year of ethnographic fieldwork following intensive care, public health and oncology in India. Specifically, I describe some of my experiences working with and studying Cansupport, a pioneering palliative care organization in Delhi that provides home-based psychological and physical support to lower-income advanced stage cancer patients. 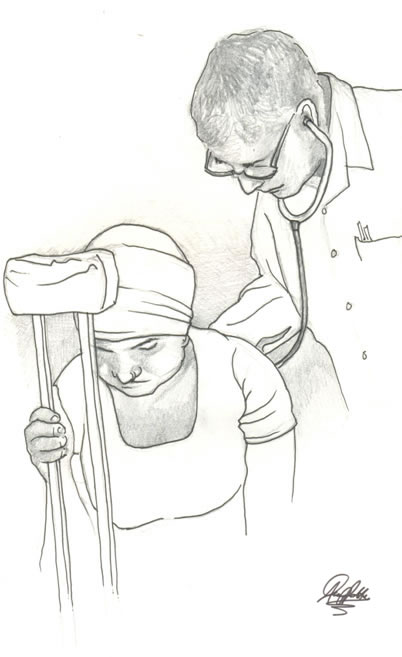 One of the first things that came to light when exploring cancer care in India was that knowledge of the prognosis was an extremely convoluted matter. From my first days in working with home-care teams, I was told to never mention the word ‘cancer’: the understanding was that patients hardly ever ‘know’ that they have the disease. Needless to say, this came as quite a surprise. Later on, analyzing the intake forms of about 2000 patients while working as a consultant at India’s largest public hospital, I realized that about 85% of cancer patients were indeed recorded as ‘not aware’ of either their diagnosis or their prognosis. Delving into the emergent literature on ‘psycho-oncology’ in India, I began to realize this was a well-recognized problem within the emergent discipline. But it took several weeks of ethnographic work in the homes and neighborhoods of patients before the meaning of “awareness” and “denial became clearer to me.
In one of the early days of the Delhi winter, I accompanied a team on a visit to the far eastern borders of the region. We were greeted by the patient’s wife – Rohini – and taken inside a room with two beds. On one lay Shambu, a former life-insurance salesman who presented with an advanced stage of the disease. In a pattern that often repeated itself, once Shambu’s initial physical discomfort was taken care of, the counselor turned her attention to the question of the family’s ‘awareness’ of the diagnosis. It was during interactions such as these that I realized the stakes of ‘knowledge’ around cancer. First, in a public health system in which oncologists see over a hundred patients in the space of a few hours, the communication of a diagnosis and prognosis – often across barriers of class and language – is often a half-achieved ideal at best. Second, even if a sense of the diagnosis is communicated and therapies undertaken, I realized that beyond the space of the hospital, just the hint of the word ‘cancer’ has the powerful potential to ostracize the patient from social life. Landlords would evict cancer-marked families, neighbors would suspend social interaction, marriages in the family would be jeopardized, and cremators would refuse the body.
Shambu and Rohini’s case captured this double elision. The counselor’s tactful conversation with Rohini elicited that she had a hazy but more-or-less accurate picture of the bleak prognosis, but that Shambu himself had not been explicitly ‘told’. A separate conversation with Shambu revealed that he too was not as much in the dark as Rohini imagined. In a situation that recurred almost inevitably, both partners had tried to keep each other in the dark, firm in their conviction that putting the diagnosis into words would collapse the world of their loved one. They each recognized not only the power of the diagnosis to inflict psychic harm on the self of the patient, but also the threat of being marginalized and isolated from their extended family, their neighborhood and their friends. The world they had built around cancer, a world they had lived in for almost two years, had no place for its acknowledgement in language. To label this complicated work of living together as living in ignorance or denial would do it a great disservice. The work of home-care that took shape recognized this and often pulled back from pushing the disease blindly onto the surface of words.