Skip to content
New Articles
Interview with Carla Joinson, author of Vanished in Hiawatha: The Story of the Canton Asylum for Insane Indians.
Interview with Jim LeBrecht, co-director of Crip Camp
The Author Speaks 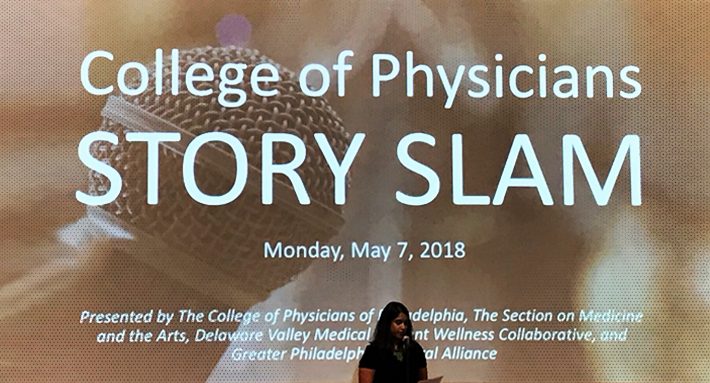 The Story Slam proved so successful that plans are underway to make this an annual event at the College.
We hope you enjoy this story by Vidya Viswanathan. 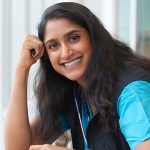 Vidya Viswanathan
Vidya is the founder of Doctors Who Create, an organization promoting a culture of creativity and innovation in medicine. She is a fourth-year medical student at the University of Pennsylvania. She received her BA in Social Studies and a citation in Mandarin Chinese from Harvard College. She is a freelance writer about medicine and innovation, and has published in The Atlantic and MedTech Boston.
Read her writing at www.vidyaviswanathan.com and follow her on twitter (@vidyavis).

Perhaps it’s painful to think back to the physics classes of our pre-med days, but you may remember Newton and his third law of motion: “For every action, there is an equal and opposite reaction.”

Well I want you to keep that in mind as I rewind the clock to the beginning of clerkship year. I was about two weeks into surgery, my first rotation. I had initially been nervous about the long hours of standing without a bathroom break, but discovered that they went by fast when you were doing such improbable things like removing a gallbladder via someone’s belly button. So on this day in the OR, I was not particularly nervous. I reached for some gloves to help position the sedated patient.

You know how in those cliché crime movies, there’s always a point where the criminal has to do incredible acrobatics to get around a bunch of lasers to reach a locked door on the other side of a room without triggering an alarm? That’s how I have always felt in the OR, just one scruffy elbow away from an unsterile disaster.

So when I reached for the gloves on the wall, of course, I was very intentionally not touching the table of sterile instruments, keeping my body far away.

As my fingers grasped the gloves, there was uproar. The scrub nurse was in my face, yelling at me that I had ruined everything. I didn’t know that by reaching over the table, even if I was not making contact, bits of dust and bacteria from my outstretched arm could make their way down onto the instruments. She yelled that the surgery was now delayed because they had to replace all the instruments. She replaced them in a huff, ignoring my apologies and offer to help her carry them from the storage closet outside. My resident was upset too, and brusque with me as my shaking hands put a Foley catheter in the patient, and then I went outside to scrub.

As the warm water washed the iodine suds off my hands, I steeled myself, telling myself to shrug off what just happened. Intellectually, I knew that I hadn’t really ruined everything, but emotionally? I felt worthless.

Fifteen minutes into the surgery, standing on the patient’s right, I was handed the liver retractor, one end hooked under the liver, the other in my hand, holding tension to tug the liver out of the way. At some point we paused the surgery for about 20 minutes, while my attending popped in on another case and my resident and scrub nurse put down their tools and sat on stools away from the field. No one told me I could relax my hold on the liver. I couldn’t tell if they forgot, or if it was a grotesque form of punishment; it felt like the latter. So I stood still under the lights like a statue, while my thoughts buzzed. Despite my efforts to refocus, I had been replaying the gloves incident in my head ad nauseum, trying to figure out what I could have done differently, and I didn’t even notice that with all my self-criticism and pent-up emotion, I had begun to sweat. The attending came back and we resumed surgery. But all of a sudden I had gotten very hot, and just like that, I knew I was about to faint, and then, I was out.

When I opened my eyes, it was to the cold steel of the retractor still in my hand, the face of my attending directly across me looking terrified, and the feeling of hands on my back. Someone gently told me to let go of the retractor, which I did. I was pushed to sit on a stool behind me, helped out of my surgical gown, given a cool cloth and juice. Suddenly everyone was nice to me, as I was wheeled out of the OR. I figured I had only fainted for a second, but later, my resident quietly told me that I was eyes closed, with an iron grip on the retractor that they couldn’t dislodge, for at least a minute, until I spontaneously opened my eyes again. Luckily, the patient was fine, liver unharmed, but it is terrifying to me what could have happened.

There is a concept in organizational behavior called “psychological safety,” meaning that team members feel accepted and respected, and do not have to fear negative consequences of self-image, status, or career with every mistake they make.

These are the teams that are not only happiest, but perform the best.

I realized that what was frustrating about medical training, especially clerkship year, was that our sense of psychological safety was completely at the mercy of whatever team we happened to be on, which switched every few weeks. Every action we took was evaluated, and the reaction to our action frequently did not follow Newton’s third law – the reaction was often proportional not to our action but to our rank. But by now I have seen people make mistakes at every level in medicine, and I hope we can get to a place where we can feel safer in sharing them and learning from them, rather than internalizing them.

2nd place story at the Philadelphia College of Physicians Story Slam at the Mutter Museum on May 7, 2018
Story written and performed by Vidya Viswanathan, third-year medical student at the Perelman School of Medicine at the University of Pennsylvania.
Video by Gregory Richter, Penn Communications