Sarat Munjuluri MD is a psychiatry resident at Baylor College of Medicine.
An aspiring playwright, he shares his experiences in the recent Houston floods.

Among the desperate parents in Target, I spotted an old friend. We had the same goal: find enriching activities that would occupy our toddlers. But by that time, less than 12 hours before Harvey was predicted to hit Houston, the pickings were pretty slim: Paw Patrol toys covered in the remnants of a peanut butter and jelly sandwich; an open Chutes and Ladders containing game pieces, but no board. We grabbed the least sticky items and wished each other the best, laughing out of fear of what was to come and amusement over the intrinsic human quality to hyperbolize weather events. My friend is Bangladeshi and is no stranger to catastrophic flooding. But even he said that this situation felt different.

The lashing storms that ensued on Saturday and piercing wails warning of flash flooding were distressing, but not unexpected. Apart from being housebound, my life proceeded unchanged; we had dry shelter, food, running water, and electricity. I called my friend that afternoon, blithely expecting him to reflect similar circumstances. He, however, stated that the water was at the edge of his curb. His family was stuck; drive and risk getting submerged. I sheepishly apologized, thinking of the short distance between us cutting our fate so divergently. He assured me that he had dealt with worse- the Memorial and Tax Day floods- and we agreed to subsequently check in on each other.

Daybreak on Sunday appeared to reveal little change to my house. So, I indulged in curiosity and walked down to the edge of my block, perhaps 200 feet away. There the water had crested over the retaining walls of the Braes Bayou, turning the parallel streets into rivers. There was an inevitability and merciless force to the water’s expansion, enveloping anything in the path. I felt suffocated by the thought of drowning and anxious over the ostensibly indefinite amount of time it would take to know my fate. I turned back home, exchanging numbers with neighbors along the way in case of evacuation. 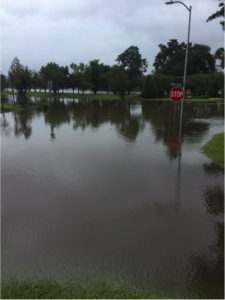 My spouse and I ruminated on an escape plan. With toddlers and my disabled parents in tow, driving seemed a ruinous option. We were fortunate to have a second floor to the house, so if need be we could carry my father upstairs. But if the waters rose higher, we could do nothing but hope for a rescue.

I cannot remember all the details of the subsequent hours, but I vividly recall the feelings: helplessness, dread, guilt, doom. Moments of near relaxation would be interrupted by sirens announcing another imminent tornado. My spouse and I hurried the kids to a windowless room with each warning, growing decreasingly less interested in parenting them in the cramped space with each iteration. I couldn’t convince my parents to join us. If God wanted to rip them and the house to shreds, it would occur in their room, they said.

I do remember calling my friend. The waters had now risen to his door. He called 911 four hours previously and was still on hold. “More water and we are done for,” he told me. I could no offer material assistance, what his family needed. So, after a period of silence, we hung up. I peered outside. Perhaps a few pathetic inches had accumulated. Our land was on a slight incline, and we were the beneficiaries. I was awash with guilt.

I went through the motions of putting my kids to bed, caught between thoughts of whether that was the last conversation I would have with my friend and whether our luck would run out and we would be next. My three year old mentioned that she had grown scared of the rain. “Me too,” I responded. We stared at the ceiling and tried to recall the sense of calm the sound of rainfall had previously provided.

I did what any budding shrink does best—call a different friend for advice. He mentioned a movie we saw a while ago, Life is Beautiful, in which a Jewish father and his school-aged son are sent by Nazis to a concentration camp. The father attempts to hide the horrific reality by improvising a game in which everyone is an unwitting participant. My friend reminded me of the message we took from that wonderful film-that humans have the capacity to experience joy, even under the most awful circumstances. Perhaps there was a greater need, a duty even, to find a wellspring of joy so that my family and friends did not have to experience even greater suffering–my own–than what was already occurring. If there was to be meaning from this event, it could be characterized by joy and pain or simply pain. 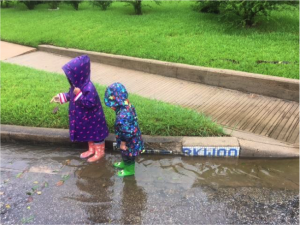 Though the rain continued, I no longer regularly checked its progress. My children took the lead on the next day’s activities. We did mani/pedis, finger painted, and made cookies. We gave thanks for the abundance of resources we had and prayed for the families who lost everything. I called my friend dealing with rising waters but did not get a response. I allowed myself to experience the sadness of unknowing and the shame of surviving intact. We prayed for his family’s safety and then returned to the transcendence of playtime and laughing, of fights and crying, and everything else that children mindfully embody. 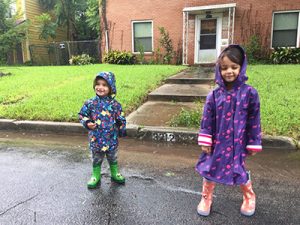 The photos documenting the joy we experienced that day stood in stark contrast to the only other visual memories I had of the weekend–foreboding skies and rushing water. When the intensity of the rain ebbed a bit on Monday, we strapped on our galoshes and went for a short walk. We saw tadpoles swarming in curbside puddles, toads hopping out of bushes, displaced street signs, remnants of cars and furniture-terrifying consequences of a flood on one hand and incredibly exciting facets of life for toddlers on the other.

Eventually, the storm passed. Aside from a few roof leaks, we survived the storm physically unscathed. A few days later, I finally was able to reach my friend. Miraculously, his family did not flood either. Our lives resumed quite quickly, and my focus at home shifted towards mundane activities. Running into my friend at Target became an event of relief and commiseration. We again talk about our children’s travails, of pointless and unending work politics, feeling embraced and sheltered by a sense of normalcy.

Nevertheless, I have treated many patients who rightfully found no joy in losing all their possessions or who have been even further displaced towards society’s margins. I ask about the storm and its aftermath as routinely as I would inquire about medication adherence, so pervasive are its effects. Some relapsed into seizures because medications washed away. Others stay with extended family across the sprawled city and drive hours to get to work–neglecting family and activities that would sustain their mental health in the process.

Bearing witness to their trauma brings about similar feelings to my experiences with Harvey: a sense of guilt in escaping the storm’s worst effects; feeling ineffective and helpless in the face of such profound loss and sadness; a need to steel myself when I walk into the doors of the hospital, as the walls drip with an even more urgent sense of physical and emotional anguish.

So it is that I return home wounded. There I meet my toddlers, still young enough that they scream my name with delight. I am reminded of that phone call, the sirens, the terror. But as I take off my shoes and socks, I spot faded bits of metallic magenta on my toes. I rediscover the joy my family and I experienced those painful days, despite it all.