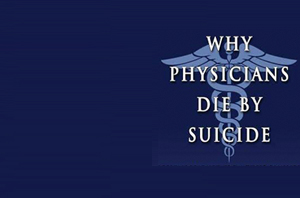 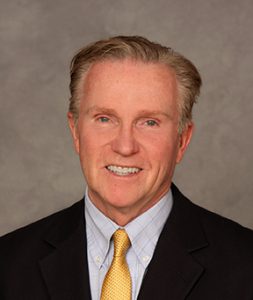 Dr. Michael F. Myers is a Professor of Clinical Psychiatry at SUNY Downstate Medical Center in Brooklyn and a specialist in physician health. In April, he and his associate Carla Fine were invited to speak to a group of first and fourth year medical students, faculty and staff about physician suicide at a session of “Why Wellness Matters,” a para-curricular course in medical humanities at the NYU School of Medicine.

Dr. Myers recently published “Why Physicians Die by Suicide: Lessons Learned from their Families and Others Who Cared.” LitMed spoke to Dr. Myers about his research at the beginning of Suicide Prevention Week (September 10-17, 2017). The edited interview follows: 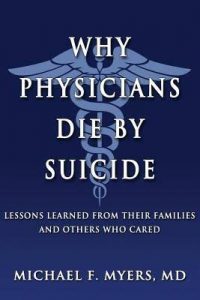 What inspired you to write this book? Whom did you write it for?

We have known a fair amount about what puts physicians at risk for suicide for some time. Yet, physicians are continuing to kill themselves despite this knowledge and enhanced treatment approaches. I have felt for some time that we need to look deeper and at a more “micro” level. So in January of 2015, with this book in mind, I began to interview individuals left behind in the wake of physician suicide. I started with their families but then I broadened my reach to medical colleagues, professors and students, training directors, and intimate friends. Later I added mental health professionals who had lost a physician patient/client to suicide. Then I talked to some patients who had lost their doctor to suicide. Finally, I interviewed some physicians who had made a near lethal suicide attempt – but who lived – and were open to describing their state at the time of desperation. What started as a small data base grew to approximately 100 interviews.

I was clear from the get-go that I wanted this to be a book for a broad audience as opposed to a scholarly and clinically-focused volume for mental health professionals. That said, my target audience is doctors themselves, their families, those who train them and those who treat them. Other readers might simply be curious about a situation that surprises them. I believe in my heart that the stories in the book – both the bereaved individuals whom I interviewed and the disguised clinical narratives from my private practice – will save lives. They are intimate, at times heart-breaking, evocative and suffused with insight and hope.

What is it about the field of medicine that causes such despair?

What a great question! I don’t think that it is medicine itself (even in its broadest sense) that causes despair. But it is true that the study and practice of medicine can have a down side that unaddressed can negatively affect one’s general health and functioning. It’s an oversimplification to say that medicine alone is demanding and exacting. Many professions are like that and don’t have suicide rates like we have. Medicine attracts and selects for bright, hard-working, ambitious and perfectionistic people. Some are also highly competitive and don’t accept defeat or failure easily. They can be very hard on themselves. Some applicants are ‘wounded healers’, meaning, they are survivors of childhood trauma, loss and family dysfunction. These folks make great doctors but can be vulnerable to psychiatric symptoms either genetically or from their early environment. Two other factors are key. First, stigma works against doctors reaching out for and receiving mental health care. I found in my research that roughly 10-15% of doctors who took their own life did not receive any care whatsoever for illnesses that were severe, as described by their families. Second, the culture of medicine is only now becoming accepting of practitioners asking for and receiving psychological or psychiatric treatment. One thing I can say, I read more first-person accounts, narratives in medical journals and in the lay press about doctors coming out of the closet, so to speak, having been diagnosed with depression, bipolar illness, perhaps a problem with alcohol or drugs, or PTSD. To me, those stories are such a gift to the world of medicine. First of all, I feel that they are therapeutic for the individual to write. Secondly though, and I know this first hand from some of my patients who told me, they had read an article in a journal about a doctor who told his story and after reading it, that’s when they picked up the phone and called saying Dr. Myers, I realized I’m not the only one. And in fact, if he can do it, I can do it.

You write: MD stands for Massive Denial. Why is it so hard for physicians to acknowledge symptoms and get care for themselves?

I’ve answered part of that above. Even medical students avoid recognizing symptoms and going for help. I think that comes from seeing yourself as super strong, that you got into medical school and many applicants don’t. Not only might you see yourself that way but often family and friends do too. They are shocked that you might be feeling down or worried – which are really normal reactions to the stress of medical school or medical practice. I learned from my patients in private practice that when/if a student or doctor gets symptoms they quickly feel “less than” or “a loser” or “pathetic” or “fraudulent” as opposed to simply feeling ill and in need of medical care. Years ago, when it was common for Deans of medical schools to welcome incoming medical students with the refrain of “Welcome to medicine, you’re the best and the brightest”, I wrote many of them to delete the second part of their welcoming sentence. This is because it reinforces a false sense of superiority or superhuman strength. And makes students who fall ill feel like real losers compared to their peers.

Other barriers to care are: working so hard that you don’t have the time for doctors’ appointments; ruggedness – remnants of a macho mystique in medicine – that I’m not like my patients – I can tough it out; equating being a patient with lowered status and eschewing the patient role; fear that if my colleagues find out that I’m getting help they will judge me harshly and show me the door; not recognizing that the symptoms they’re having are actually adversely affecting their performance at work and that they are impaired – some conditions, including depression, can be elusive so the doctor can’t see it – also some doctors are masters at concealing how horrible they are feeling inside and this is why so many survivors are shocked to learn that they took their lives.

Finally, some hospital credentialing applications and state medical licensing board applications ask outdated and very intrusive questions about mental health. This may even be in violation of ADA. These questions, understandably, terrify doctors so many will avoid getting help so that they can say “no” to questions about previous treatment.

One thing that I found particularly intriguing was that physicians often dress in their work outfit and kill themselves in their offices. Why is that?

Yes, others have the same reaction. My speculations are about one’s identity as a physician overriding one’s identity as a spouse, parent, volunteer, etc. In some doctors and some branches of medicine, this is very true. That you are doctor first and whatever after that, if anything. This touches on the demands of training and medical practice. Many doctors spend a huge number of hours per week in the hospital or their offices. Even when not on call, some doctors call in to check messages or to make sure everything is okay. Some families tell me that even on vacation, their loved one calls the office. Other speculations include killing yourself in a place where your immediate family will not find your body. Also, offices and hospitals are repositories for lethal drugs and equipment that can be used as a means of ending your life. I have heard more than one physician survivor of a colleague’s dying in the hospital or office or dressed in scrubs characterizing this as “the ultimate fuck you to medicine.” That is his/her way of saying that medicine has worn me down and killed me. A less hostile interpretation is about comfort and soothing – “I have many good memories of being a doctor and helping others in this office or hospital – I feel less alone here, dressed as I am, as I take my exit from this life.”

One family member says that there needs to be more attention in medical school to the humane side of medicine. What exactly does that mean? How and when should this happen?

I take it as meaning that medical students and doctors are human first before becoming physicians. Training must not extinguish their humanness that attracted them to medicine in the first place. Sure they need to acquire a huge amount of information and skill to become doctors but it should not be at the expense of their individual personhood. In fact, the latter should be celebrated. It needs to begin on day one of medical school and can be conveyed by institutional messages that convey welcome to them – and their families. And professors need to be inclusive in their teaching about their own life stories and other narratives. Medical humanities, Gold Humanism rounds and other narrative medicine seminars are all part of the ethos of the humane side of our work and I feel they are essential in contemporary training.

Role models, too, are critically important because they shape the developing professionalism of our students. Bedside teaching is key too so that students learn basic respectfulness of patients and the intimacy of the doctor-patient encounter. The further along they get in medical training, they observe supervisors that seem to embody what kind of physician they want to be. They’ll say, I worked with this surgeon, not only was she technically superb and diagnostically, she was amazing, but her manner with patients, if I could be half that, then I will be thrilled with myself.

It saddens me that so many students report feeling burned out. We all have a role to play in combating this. The doctors who report burn out are saying that I’m not getting enough time to think about my patients, let alone spend time with them at the bedside. And I’m missing that. I’m not touching my patients like I used to. There’s this yin and yang in the culture of medicine: be robotic but also be human.

How about physicians who have been in practice? What can be done to encourage them to seek treatment?

Doctors need more education about what to watch for in themselves and how to get help. This sounds very basic but many doctors do not know what changes might be serious. Burnout is all over the medical journals and medical social media but there are fewer articles about PTSD, depression and anxiety disorders, substance abuse, eating disorders and other illnesses in doctors. I’d like their family members to get some basic education too because so many worry and their exhortations fall on deaf ears. I feel very strongly that all mental health professionals, especially psychiatrists who treat doctors, must be especially welcoming, warm, invitational and clear in their approach. I taught a course with a colleague for 20 years called “Treating Medical Students and Physicians” at the annual scientific meeting of the American Psychiatric Association. It was canceled because enrollment was falling off. Many psychiatrists do not realize that some doctors have to be treated differently than their lay patients. And that is not an elitist statement. Too many doctors fall through the cracks and do not get proper treatment. We all have a role to play here.