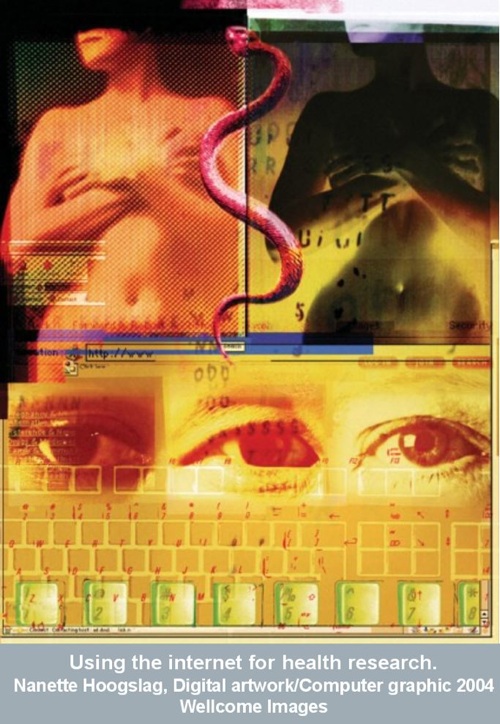 Commentary by David Biro, MD, PhD, Assistant Clinical Professor of Dermatology at SUNY Downstate Medical Center and author of One Hundred Days: My Unexpected Journey from Doctor to Patient. His new book, The Language of Pain, will be published by Norton in 2009.

Illness like any experience that deviates from the norm (in this case, the norm of health) triggers a search for meaning: something is wrong with me, I must find out what is happening. Since the source of illness lies within us, we instinctively turn to introspection: let’s try to see what’s happening. But immediately we encounter obstacles. There is the opaque surface of the body that literally prevents us from seeing inside. And more significantly an entire nervous system designed specifically to limit (thankfully) our engagement with the body and continually point us in the opposite direction. Even consciousness – that quintessentially inner and private realm – constantly reaches outwards towards the objects in the external world that we think about, desire, and fear.

While not explicitly offering illness as a case-in-point, many contemporary thinkers including Sartre, Foucault and Lacan have consistently undermined the traditional approach to self-knowledge by introspection. Instead, they emphasize the importance of the Other in understanding the self. We rely, for example, on other people like doctors, who, in turn, have studied other bodies (both dead and alive). We rely on things like books and the Internet which provide information about ourselves. And of course we rely on that ancient means of self-reflection, the mirror, which allows us see ourselves from perspectives otherwise unobtainable.

The Case of Frigyes Karinthy

Frigyes Karinthy was a well known Hungarian writer of the early 20th century who developed a brain tumor. The tumor, however, would not be diagnosed by one of the many specialists he consulted with but rather quite remarkably by himself, a layman who never went to medical school. Himself, that is, with the help of a metaphorical mirror.

The first sign of trouble came with the trains roaring in his head. Next the sense that pictures and tables were moving when they weren’t. Then there were headaches and fainting fits. One doctor attributed the symptoms to an ear infection. Another to nicotine poisoning and a third to humiliations suffered in early childhood. In each case none of the prescribed interventions helped, and for a while Karinthy was determined to live with the trains and hallucinations, belittling their importance as his doctors did. But when they persisted and new symptoms developed, he could deny them no longer. They were interfering with every aspect of his life. Regardless of what the doctors thought, something was wrong. Very wrong.

Proof of his conviction would come unexpectedly. Karinthy was visiting the clinic where his wife, a doctor, worked at the time. Accompanying her on rounds, Karinthy stopped at the bed of a young man, transfixed by the expression on his face. It looked familiar, he thought. The man has a brain tumor, his wife grimly informed him, and is terminal. Ah, remembered Karinthy, he had seen that face before, in a friend who died many years ago of the same condition. But Karinthy wasn’t entirely satisfied. He continued to be haunted by the sight. It reminded him of someone else too, he was sure.

Later on it hit him with the full force of the roaring trains in his head:

I had suddenly stopped dead in the gateway, like the ox I had seen unwilling to enter  the slaughter-house. At that moment, it had flashed into my mind. I remembered. The pale, vacant face of the dying man reminded me of my own expression as I had seen it lately in my mirror while shaving. I took two steps, then stopped again. With a foolish grimace, like a man who pretends to belittle some achievement he is boasting about, I said to my wife: “Aranka, I’ve got a tumor on the brain.”(1)

Aranka dismissed her husband’s epiphany as crazy. But she was soon proven wrong. Fortunately, things would turn out well for Karinthy. He was successfully operated on by the famous Swedish neurosurgeon Olivecrona. Afterwards, he returned to his writing career and publish his best work yet, a memoir of his fascinating encounter with illness, A Journey Round My Skull.

Karinthy is not unique in deriving insight about his illness from another person. Many patients instinctively gravitate toward other patients with similar diagnoses. How is illness playing out in them and what in turn might it mean for me? Indeed, this is a recurring theme in the increasingly popular genre of illness narrative or pathography. Whether they find fellow sufferers in the clinic or in support groups or on the Internet, patients are constantly on the lookout for what Alphonse Daudet, another writer-patient, once called his “doppelgängers in pain.”

On the one hand, these significant others are an instant source of support and sympathy in a world that tends to alienate and isolate the sick. “My doppelgänger,” writes Daudet during his stay at a French sanatorium, “the fellow whose illness most closely resembles your own. How you love him, and how you make him tell you everything!” At the same time, they offer a vital means to self-knowledge. Towards the end of his life, Daudet could no longer walk steadily. The ataxia caused by syphilitic damage to his cerebellum resulted in a clumsy, halting gait. But the only way for him to see what he looked like was to observe himself in a mirror. Or better yet in another patient with the same problem:

I see him in my mind’s eye, putting one foot down carefully before the other, but still tottery: as if walking on ice. Sad. (2)

No doubt Daudet feels sad for his doppelgänger. But equally sad, perhaps more so, for himself and what has become of him.

Nor do sufferers restrict “finding” themselves in human beings that literally look like them. Grieving the loss of his lover who died of AIDS, Mark Doty finds solace and insight from a seal he spies in Cape Cod Bay during a walk. Apart from the group and alone, distressed and exhausted, the seal “conveys a kind of helplessness and desolation” that cuts Doty to the core. Not only because he feels sympathy for another sufferer but because he sees himself in the seal, the inside of his grief-stricken mind suddenly visible (3). Others find themselves in the fictional characters of books they read, in the cadences of songs they listen to, and in the sky that seems to mirror their emotions. All of which should be understood not as a passive “stumbling” upon the self but as an activity that requires a degree of imaginative or metaphorical work on our parts. We project ourselves onto things in the world – other people, seals, or songs –so we that could see and understand ourselves.

As it turns out, the human brain may be hardwired to engage in projections of this sort. One of the most exciting, recent discoveries in science has been the mirror neuron. First isolated in monkeys and later found to exist in human beings, these neurons (and groups of neurons) are active not simply when we are moving and emoting but when we observe others moving and emoting. Our brains, as it were, re-enact or mirror the movements and emotions of other people as we watch them. Although scientists are still working out the implications of this extraordinary finding, it is almost certain that the brain’s mirroring system contributes to the profoundly social nature of human beings and may well be responsible for many of our greatest collective achievements: language, social institutions, and culture (4).

Many scientists also believe that neuronal mirroring can reflect in two directions, illuminating both the external world (of others) and the internal world (of self). By constantly observing and imitating others, we not only learn about them but about ourselves: How we see and think of ourselves; the meanings we ultimately give to our most intimate and “unsharable” experiences like pain; indeed the ongoing project of human creation in general as it works to fill the world with things that possess the capacity to reflect our humanity (5).

Thinkers like Sartre, Foucault and Lacan may have been exquisitely prescient. Mimesis may well turn out to be a prerequisite or stepping stone to self-knowledge. We observe, reproduce, impose patterns, and thereby understand. We can do this with objects that happen to cross our field of vision like the patient encountered by Friges Karinthy or the seal by Mark Doty. But we could also do this on a more sophisticated level. If a potential doppelganger doesn’t exist we can invent one. As Alphonse Daudet does in his dream of the boat with the damaged keel (mirroring his diseased keel-spine). And as many artists do in their poems and paintings. After finishing his masterwork, Flaubert is famously reported to have said of his creation: Emma Bovary, ces’t moi. The re-production leads to recognition. The same thing that painters do perhaps more self-consciously in their self-portraits and in the case of Frida Kahlo, her double self-portraits. Here the dictum of philosopher Nelson Goodman is most transparently realized: Comprehension and creation go on together (6).