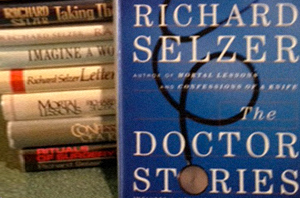 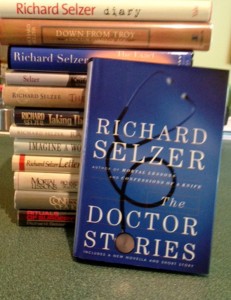 If there were a Medical Humanities Hall of Fame, physician-writer Richard Selzer (1928-2016) would be a first-ballot selection. And likely by a unanimous vote. The diminutive doctor had a very large presence in the field. He energized the medical humanities movement in the 1970’s and 1980’s with his lectures, readings, writing workshops, commencement addresses, correspondence, personality, and kindness. But it was his writing – earthy and elegant, whimsical and wise – that masterfully mingled the world of medicine with the world of the arts and highlighted the necessity of humanity in health care.
His literary output includes more than 125 published short stories and essays, a work of nonfiction (Raising the Dead), an autobiography (Down from Troy), a novella (Knife Song Korea), and a diary (Diary). Many of his stories reflect an interest (even an infatuation) in decay and death, the beauty of the body, how illness beatifies the sick individual, the power and fallibility of doctors, and the great panacea/contagion – love.
“Writing came to me late, like a wisdom tooth,” Selzer proclaimed. Indeed, he was 40 years old when he began writing seriously. His early efforts at crafting stories dutifully occurred between the hours of 1:00 and 3:00 AM. His initial focus was creating horror stories because it was an “easy” genre to handle. That fondness for the macabre and otherworldly never dissipated as he continued to utilize horror (and humor) in many tales. The majority of Selzer’s stories involve doctor-patient relationships, surgery, and suffering. Some of his literary work is weird (“Pipistrel”), experimental (“A Worm from My Notebook”), and an exercise in reimagining (“The Black Swan Revisited”).
Surprisingly for an MD, he seemed a bit unconcerned about facts in his writing. Rather, he was deeply interested in creating impressions. For Selzer, facts weren’t necessarily equivalent to truth. After all, facts change but impressions endure. Still, Selzer stubbornly searched for truth (and love) in his stories. He was enticed by language and the sound of words. From time to time, he manufactured his own words. He disliked gerunds but appreciated onomatopoeia. His favorite doctor-writers were John Keats and Anton Chekhov both of whom died from tuberculosis – Keats at age 25 and Chekhov at age 44.
I don’t know which story Richard Selzer considered his best or most beloved, but I suspect that “Diary of an Infidel: Notes from a Monastery” was at or near the top of his list. The rest of us, however, definitely have our favorite Selzer stories. And while there are so many wonderful tales to choose from, I recommend the following 10 not-to-be-missed selections. My list is divided into two sections. Part 1 includes personal favorites and stories that don’t get nearly the attention they deserve. Part 2 is comprised of stories and an essay that I find very useful in teaching.
Part 1: Five Fabulous Favorites:
1. “Tom and Lily”
2. “Luis”
3. “The Consultation”
4. “Toenails”
5. “Fetishes”
Part 2: Five Fixtures for Teaching:
1. “Brute”
2. “Imelda”
3. “Sarcophagus”
4. “Wither Thou Goest”
5. “The Surgeon as Priest”
So there you have it. The two greatest stories by Richard Selzer are “Brute” and “Tom and Lily.” Of course, that’s just my opinion. How do you see it? You are invited to post to the blog with your favorites. (I have a hunch that “Imelda” is going to vie with “Brute” for the top spot.) In the meantime, The Doctor Stories by Richard Selzer is a perfect place for readers to roost – either as an introduction to his work or an opportunity to reacquaint with some notable tales.