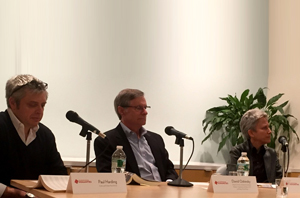 On a recent winter’s evening, Pulitzer Prize winners David Oshinsky and Paul Harding appeared together at the NYU Center for Humanities in an event cosponsored by the NYU Division of Medical Humanities and the Bellevue Literary Press. Erika Goldman, the publisher and editorial director of the Bellevue Literary Press, moderated the session. Jane Tylus, faculty director of the NYU Center for Humanities, provided opening and closing remarks. The evening also had support from the Pulitzer Prize Campfire Initiative.

David Oshinsky’s book, Polio: An American History (Oxford University Press) won the 2006 Pulitzer Prize in History, as well as the Hoover Presidential Book Award in 2005. It became the basis for a 2009 PBS documentary on polio. In 2010, Paul Harding’s book, Tinkers (Bellevue Literary Press) won the Pulitzer Prize in Fiction and a PEN/Robert W. Bingham Prize. Drawing from their respective genres in the humanities, the authors shed light on how chronic illnesses can affect individuals and their families, in the case of Harding’s novel, and on how epidemics can affect populations and national responses in the case of Oshinsky’s history of polio.

In her annotation of Oshinsky’s book in the NYU Literature Art and Medicine Database, Dr. Janice Willms notes that the narrative was written in a way that readers were easily able to grasp how it was “real people fighting a battle that swept from certain success to likely failure and back again many times, often almost overnight.” Dr. Tony Miksanek, in his annotation of Harding’s book, focuses on how the “story presents some exquisite impressions of seizures along with the aura that precedes them,” and how it “masterfully represents how we measure life.”

Both authors spoke of creating narratives that convey a truth, yet their sources for truth are antipodal in nature. As an historian and documentarian, Oshinsky goes to archives and other sources of objective facts and occurrences to build his narrative. He told the audience that in creating his narratives, “not only am I telling a story, but I am fitting into a larger mosaic of other stories.” He read a section from his book about a particular polio victim, Fred Snite, that interweaves both the personal suffering and social responses his plight generated.

He had lost the ability to cough so his throat had to be regularly suctioned. He had to be fed in rhythm with the respirator which caused his chest to rise and fall every four seconds, 21,600 times a day. But that was only part of the story, the lesser part. What kept Snite in the public eye was his determination to lead “an otherwise normal life.” He became a tournament-tough bridge player, reading the cards in a rearview mirror placed above his head. He traveled to race tracks and to college football games in a trailer equipped with a spare iron lung. “His arrival at Notre Dame Stadium was one of the events of the afternoon,” a friend recalled, “Enter the visiting team, polite cheers, enter the home team, loud cheers, enter Frederick, pandemonium.” (p. 63)

Oshinsky lamented that as an historian he can’t take the liberties availed to novelists, but Harding noted, in referring to this passage, that he is actually “deploying the same tactic as a fiction writer.” Harding was allowing that the historian must work from facts and documents, but like the fiction writer, must create compelling narratives if the goal is to reach the general public.

As a novelist, Harding builds his narratives from what he calls “imaginative truth.” He starts by “imagining my way into the lives of people…whose lives might otherwise pass by unremarked. The value of their lives would not be witness to.” In Tinkers, he imagines his way into the life of a person with severe epilepsy and what it must be like to experience a seizure. He gives witness to the experience in the section he read (or “tone poem” as he called it):

The aura, the sparkle and tingle of an oncoming fit, was not the lightning—it was the cooked air that the lightning pushed in front of itself. The actual seizure was when the bolt touched flesh, and in an instant so atomic, so nearly immaterial, nearly incorporeal, that there was almost no before and after, no cause A that led to effect B, but instead simply A, simply B, with no then in between, and Howard became pure, unconscious energy. It was like the opposite of death, or a bit of the same thing death was, but from a different direction: Instead of being emptied or extinguished to the point of unselfness, Howard was over-filled, overwhelmed to the same state. If death was to fall below some human boundary, so his seizures were to be rocketed beyond it. (pp. 47-48)

Harding said he assiduously avoided doing any research about epilepsy, and had only some family mythology and his own close call with electrocution to inform his writing. But, although the seizure experience he describes was mostly mined from his imagination, it covers basically the same scope as a traditional biomedical description of seizures that can be found in Harrison’s Principles of Internal Medicine–minus the literary splendor:

Some patients describe vague premonitory symptoms in the hours leading up to the seizure…The initial phase of the seizure is usually tonic contraction of muscles throughout the body, accounting for a number of the classic features of the event. Tonic contraction of the muscles of expiration and the larynx at the onset will produce a loud moan or “ictal cry.” Respirations are impaired, secretions pool in the oropharynx, and cyanosis develops. Contraction of the jaw muscles may cause biting of the tongue. A marked enhancement of sympathetic tone leads to increases in heart rate, blood pressure, and pupillary size. After 10–20 seconds, the tonic phase of the seizure typically evolves into the clonic phase, produced by the superimposition of periods of muscle relaxation on the tonic muscle contraction.

Thus, Oshinsky and Harding compose compelling narratives about illness experiences originating from different places and evolving from different forms. In her forward to Humanity in Healthcare: The Heart and Soul of Medicine, Iona Heath captures the essence of what the varied approaches Oshinsky and Harding use when she states, “skilled writers help us to see the world and our own place within it in a new light–a light that falls from a slightly different direction revealing subtly different detail.” (p. iv)
These are just a few of the many insights the authors provided during the session.
A video of the entire program is available at: https://www.youtube.com/watch?v=w-l86fOAsLY&feature=youtu.be.