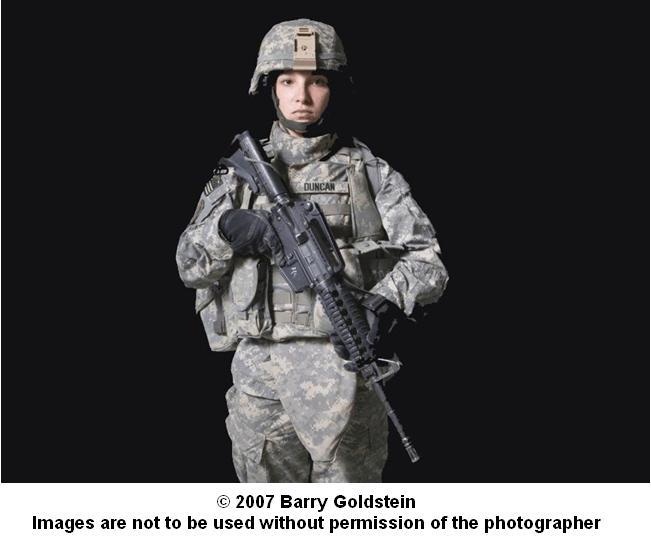 In June and July of 2007, I spent a month in Iraq photographing and interviewing soldiers of the Army’s 2/69 Combined Arms Battalion of the 3rd Brigade Combat Team, 3rd Infantry Division. The visit was the culmination of a project intended to convey a sample of the variety of faces and voices of those who serve in our armed forces. I began the project with no political agenda, preferring to let the soldiers speak for themselves. You will find no more powerful an indictment of war than from an experienced professional soldier, nor a more eloquent enumeration of the reasons for serving.

The origins of the project began in New York City on September 11, 2001. Like many New Yorkers, I photographed the attacks and the city’s response in the days that followed. Subsequently, I undertook a project photographing and interviewing a group of New York University medical students who had volunteered to work in the medical examiner’s morgues helping to identify human remains. This was their first exposure to the results of extreme and deliberate violence, and it had a profound effect on them. This work was ultimately published in a collection called Being There (Master Scholars Press, 2005).

By the time Being There came out, the war in Iraq was well under way–a direct consequence of the events I’d witnessed of 9/11. There were parallels between the young medical students I’d worked with, and the young soldiers serving overseas. Soldiers train extensively for their work, take it very seriously, and may experience levels of violence that most of us scarcely imagine. But despite their uniform dress and appearance, soldiers are individuals, and have many of the same concerns, desires and problems as the rest of us. I wanted to learn more about those who’ve chosen this particularly demanding profession in post-9/11 America.

After a year of initial inquiries, I was fortunate enough to be introduced to members of the 2/69 Battalion of the 3rd Brigade Combat Team, 3rd Infantry Division, stationed at Ft. Benning (Georgia). My contact was (then) Lieutenant Colonel Kathy Platoni, Ph.D., a practicing psychologist and combat stress specialist with over 25 years of service. I made my first trip to Ft. Benning in April of 2006, only three months after the brigade’s return from Iraq. During much of that time, the approximately 400 soldiers of the battalion were deployed in Ar Ramadi, then the “seat of the insurgency” and home to a particularly violent form of urban warfare. As one soldier noted:

Ramadi taught me the true nature of war. I’d spent years studying war—its philosophy, rules—but war is ugly, chaotic, confusing. Everyone gets hurt. No one survives—because you’re not the same afterwards. You experience the crushing depression of seeing someone you love die violently—and think that you’re responsible. A 24-year-old should not have to do that.

I subsequently made eight trips to Ft. Benning, photographing and interviewing members of the brigade, and, when possible, their families. I asked the soldiers about where they grew up and why they joined the military, about whatever experiences during their deployment they cared to share, and about the difficulties of maintaining a family life both during and after deployment. Again, my goal was to convey something about who these individuals are, via their own words.

In January of 2007, it became clear that the brigade would be re-deployed. I decided to finish the project with a visit to the 2/69 in Iraq. When I arrived at Forward Operating Base Rustamiyah on the eastern edge of Baghdad in mid- June, the battalion had been deployed for three months. This was the second deployment for over half of these soldiers, and the third deployment for many.

The battalion lost three men the day before I got there. I photographed and spoke with their company commander a week later, and realized something I hadn’t before, despite all of my interviews. He knew these men intimately–knew them more closely than family. When the rest of us suffer this kind of loss, we take time for ourselves. These folks don’t have the luxury of a day off. They have to go right back out the next day– usually performing two 4-6 hour patrols a day, under constant stress. The weather is extreme–between 110-120 deg F–and these men and woman carry over 60 lbs of gear and weaponry. I near about died every time I went out carrying just a helmet, body armor and a camera. I still don’t entirely know how they do it.

Our soldiers have to be warriors, politicians, civil engineers, judges, and anything else that’s called for in their particular area of operations. The issue as to what we’re doing there, or whether we’re being at all successful, is moot to these soldiers. They go where they’re sent, do what they’re told, and try and make the best possible job of it.

I feel an enormous sense of responsibility to the men and women who have shared their stories with me. My travel is finished, and I’m now faced with the hard part–editing several thousand photographs, and several hundred pages of transcribed interviews. The intent is to collect these in a book, tentatively titled Grey Land: Soldiers on War. The title comes from the poem “Dreamers” by the WWI soldier and poet Siegfried Sassoon:

Soldiers are citizens of death’s gray land,
Drawing no dividend from time’s to-morrows.
In the great hour of destiny they stand,
Each with his feuds, and jealousies, and sorrows.

You can see a slide show of Dr. Goldstein’s images from Iraq at www.bgoldstein.net/iraq. The show will start automatically, and takes about five minutes.