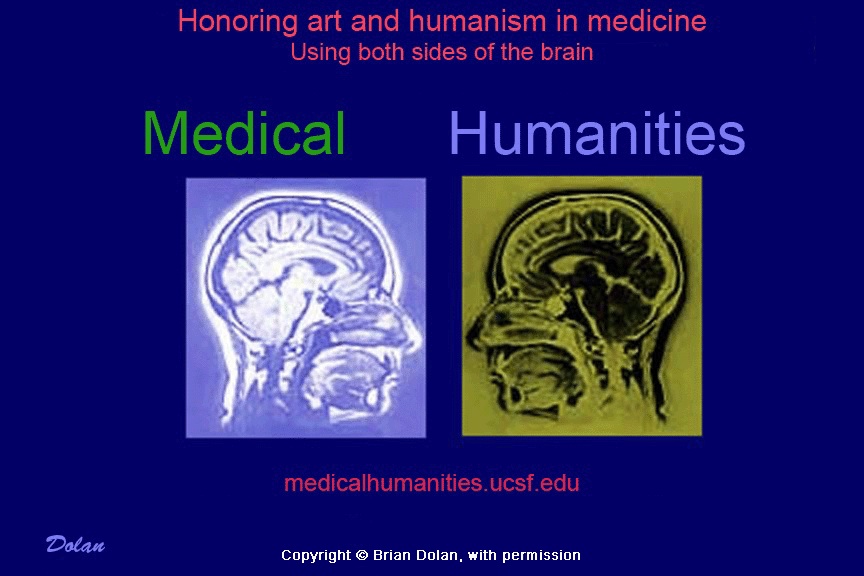 Commentary by Brian Dolan, Ph.D., Professor of Social Medicine and Medical Humanities at University of California at San Francisco

A few weeks ago, I hosted a workshop for faculty from a number of campuses who work within medical centers and are involved with medical humanities courses or programs. My opinion at that time was that scholarship and courses in the medical humanities needed to be academically rigorous to gain credibility amongst medical educators who are obsessed with defining skill sets, setting objectives, and measuring the “impact” of course content. I was (and am) not prejudging anyone’s commitment to academic standards. But if anyone had experience anywhere close to my own, it probably involved meeting with skepticism from within medical centers about the uses, or “value added,” of providing instruction in medical humanities in an already overcrowded curriculum. Fundamentally the challenge of maintaining a role for medical humanities seems to lie in balancing the students’ desires for freedom of intellectual inquiry with an institutional pressure to herd.

I asked others what kinds of projects are supported under the name of medical humanities in their institutions. Does a jazz session count? Painting? Poetry writing is very popular amongst students, residents and faculty, but why, I wondered, can’t that just be called a hobby? On the other hand, we have an “art for recovery” program, and it raises provocative questions and potential data about the importance of humanities-based therapeutic intervention for patient care. Thinking I was playing devil’s advocate, I asked why all this had to be brought further into the classroom and formalized, naming specific skills and objectives to be met through such instruction? Might that raise further problems rather than provide increased opportunities for the students? What follows is a paraphrasing of my thoughts and discussions about this.

Would medical students want to pursue course work laden with the requirements that match the rigor and standards set for students geared for a different degree path? Why not, I thought. When I was in college I took electives to see what other fields were all about and I didn’t expect to be given a watered-down version. It would be offensive to humanities scholars to ask them to present their subject in a different way to medical students. Esteemed colleagues of mine who hold MDs and teach courses in writing believe in the rigor of course work—they themselves have enrolled in humanities courses and on occasion received other degrees. On the other hand, I repeatedly hear that medical students don’t read, so don’t assign too much. And is going into Foucault’s notion of the “clinical gaze” really necessary? Is there utility in making medical students genuflect to the humanist-theorists in the way that professional humanists need to do for career advancement?

But who said anything about professional humanists (i.e., people with PhDs in history, literature, philosophy, etc.)? I have also been told that medical students will not really pay attention unless the instructor has a MD. They need role models, leaders who will show them that it is OK for MDs to pursue such interests. Also, unless you have been in the clinic, it’s hard to share the emotional reasons why humanities are useful. It sounds like it’s therapy, I say, a different kind of utility than opening up new research methodologies for reflecting on the complexities of modern medicine. It then struck me that the distinction between “education” or “entertainment” is not absolute but relative to what one wants out of it. The humanities can represent deeply philosophical, pragmatic, emotionally driven and/or entertaining approaches to understanding the human condition and the social relations of physicians, scientists, patients and the rest of the world.

The dilemma of medical humanities is not that it is reduced to a formulaic set of educational goals or dismissed as a form of entertainment, but that it is a “field” with no boundaries, yet apparently centered on each individual. To think and act like a humanist-physician or humanist-scholar requires an understanding of one’s relationship to the rest of the world. Whether one is analytical in approach or expressive, a chronicler of the times or a jazz musician, the humanities supports your form of engagement. It seems counterproductive to reduce this to skill sets and the mechanics of cognition. “The medical humanities” is a form of consciousness about all that is educational and entertaining about being human. It embraces what should be the overwhelming commitment of every medical school: to honor art and humanism in medicine, however that is expressed, and by whomever it is expressed. The lesson of medical humanities ultimately relates to respect for others’ views, but formalizing that runs the risk of excluding people from that lesson-plan. My feeling now is that medical humanities should not be curricular-bound; it is too big for that. Rather, it should be articulated and supported as part of campus culture, contributed to by everyone who thinks of themselves as a humanist. This does not exclude instruction or “education,” but neither does it dismiss “entertainment.” In fact, make the elective or non-credit classes entertaining. After all, that might be more important than subjecting students to another test.