Skip to content
Latest news
Reading Foucault’s The Birth of the Clinic in 2021: Does the Gaze Still Dominate its Masters?
By J. Russell Teagarden
LitMed Campaign
Edvard Munch: Painting the Soul
by J. Russell Teagarden
Rx Books: An Interview on Bibliotherapy with Darlina Liu
By Katie Grogan, DMH, MA
Healing her…..healing me…. 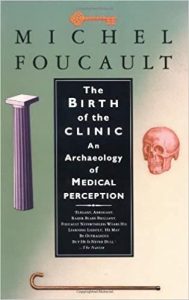 “This is a book about space, about language, and about death; it is about the act of seeing, the gaze,” Michel Foucault writes opening The Birth of the Clinic (p. ix). He calls this endeavor in the title “an archeology of medical perception,” with his research project “determining the conditions of possibility of medical experience in modern times” serving as the archeological site (p. xix). For Foucault, modern times begin with the “birth of the clinic,” and he links medical experience to “medical perception.” The medical perception in the book title becomes “the gaze” in the text, which takes shape as a heuristic for what can be seen, heard, and felt when coming upon a person’s signs, symptoms, and pathology (i.e., disease). The gaze determines the extent of medical knowledge. “That which is not on the scale of the gaze falls outside the domain of possible knowledge” (p. 166), and Foucault thus warns, “the gaze that sees is a gaze that dominates…it dominates its masters” (p. 39).

That was Foucault’s idea in 1963 when the book was first published in France and in the 1973 English translation. He died in 1984. During the thirty-seven years since then, and certainly during the fifty-eight years since the book was first published, the clinic has advanced, and the space and views offered the gaze have expanded. With these advances, can we say the gaze still dominates in 2021? I consider the question.

Foucault writes a historiography featuring the gaze as central. He concentrates on historical accounts describing the different influences affecting the gaze, especially around the time when what he calls the clinic becomes a place for treating people and training clinicians.

Foucault jumps in during the mid-eighteenth-century period of “classificatory medicine,” when “…disease is given an organization, hierarchized into families, genera, and species,” (p. 4) akin to botanical classifications, offering doctors “a gardener’s gaze” (p. 119). Diseases were accorded their own existence independent of the individual body, and so knowledge of particular bodies only interfered with discerning true diseases.

“To the pure nosological essence, which fixes and exhausts its place in the order of the species without residue, the patient adds, in the form of so many disturbances, his predispositions, his age, his way of life, and a whole series of events that, in relation to the essential nucleus, appear as accidents.” (p. 8)

Foucault makes his point with the following set of signs and symptoms:

“…spasms of lower abdomen, where it may cause dyspepsia, visceral congestion, interruption of the menstrual or hemorrhoidal flow, towards the chest, which breathlessness, palpitations, the feeling of a lump in the throat, coughing, and finally reach the head, causing epileptic convulsions, syncope, or sleepiness.” (p. 10)

He further notes that there is no significance to whether these signs and symptoms progress over time within a single person, suggesting some sort of pathological relationship, or whether one or more occur separately across several individuals, suggesting differentiating pathologies; they still get placed in the same class: “single spasmodic malady.”

Thus, the medical—classificatory—gaze during this period was confined to signs and symptoms such that “paradoxically, in relation to that which he is suffering from, the patient is only an external fact; the medical reading must take him into account only to place him in parentheses” (p. 8). As a result, judgments about a patient’s condition could draw only from similarities and differences among sets of signs and symptoms laid out in pre-determined patterns—this sign goes here, that symptom goes there. Time and space have no role; never first this, then that, or here this, there that.

Modern medicine begins for Foucault around the time of the French Revolution, at a time when the gaze newly encompasses other factors. Time and space now mattered.

“The locus in which knowledge is formed is no longer the pathological garden where God distributed the species, but a generalized medical consciousness, diffused in space and time, open and mobile, linked to each individual existence, as well as to the collective life of the nation… “(p. 31)

Patient attributes and environmental factors became relevant considerations in discerning diseases. Furthermore, political changes stemming from the French Revolution ceded power over health matters to the new government, which it promptly transferred to the doctors. Society would now have a point of view on what constitutes health, a view the gaze could not escape. This gaze focused on health as it concerned a “benefit to the state.” Not until later yet in the nineteenth-century would the gaze shift towards deviations from established norms of health, when, in other words, the gaze was redirected from what Foucault calls the social space to the pathological space. This particular shift for him marked a transformation of classificatory medicine to clinical medicine.

This clinical medicine is more open than classificatory medicine and offers a “concrete sensibility.” Doctors no longer decided whether a patient’s condition fit into this or that class; they instead assessed the probabilities of a condition fitting into this or that disease. They no longer had to “simply read the visible; [they had] to discover its secrets” (p. 120). To Foucault, this was the clinic, a place of analysis.

“There is disease only in the element of the visible and therefore statable” (p. 95). Foucault qualifies, however, that “the purity of the gaze is bound up in a certain silence.” This silence is the need for a gaze unaffected by various theories, preconceptions, and other influences prejudicing interpretations of observations. He locates the space where a pure gaze is corrupted as “anterior to that of the visible” (p. 108).

Even if the silence Foucault demands is achieved, what is “visible and expressible” limits the gaze. Many diseases would overlap based on what is visible and expressible in this model. Consider aging and dementia where both share many of the same visible and expressible attributes. Thus, there can be no “pure Gaze that would be a pure Language,” as Foucault says, meaning that other factors affect the ultimate perceptions in the clinic. The gaze does not displace the “supreme art in medicine” (p. 114).

Bring Up the Bodies

Pathological anatomy, the science generating knowledge about the visible alterations on organs and tissues diseases cause, marked an important advance for the clinic upon “the day it was admitted that lesions explained symptoms” (p. 127). From then on, and accelerated by investigations using exhumed corpses, pathological anatomy became “an objective, real, and at last unquestionable foundation for the description of diseases” (p. 129).

Pathological anatomy took the medical gaze deeper through “a path that had not so far been opened to it: vertically from the symptomatic surface to the tissual surface” (p. 135). The gaze could now account for more than just surface observations and signs and symptoms, and became three dimensional as a result. Even the term “gaze” took on added meaning. Where it once referred to what was seen, pathological anatomy added touch and hearing as sensorial elements. Altered anatomy and various lesions, such as “deformations, figures, and accidents and of displaced, destroyed, or modified elements” could be linked to observations” (p. 136).

Foucault sees pathological anatomy as a quantum leap in the modern-day clinic because of the breadth and depth the gaze acquired and the concrete knowledge generated.

The access of the medical gaze into the sick body was not the continuation of a movement of approach that had been developing in a more or less regular fashion since the day when the first doctor cast his somewhat unskilled gaze from afar on the body of the first patient; it was the result of a recasting at the level of epistemic knowledge itself. (p. 137)

Indeed, Foucault attributes the application of pathological anatomy in the clinic during the early nineteenth-century as the “great break” in Western medicine, and when the “modern medical gaze was finally constituted.” Doctors could “confront a sick organism” (p. 192). And so it has been since, insofar as where the gaze is directed.

Over the ensuing two centuries, new technologies have taken the gaze deeper into bodies. Imaging technologies such as x-rays, CT scans, and PET scans see deeper into tissues and cells. Biological technologies see deeper into molecular structures including the human genome. Visualization technologies like miniature cameras and virtual reality see the once-hidden. Sensor technologies can see the invisible such as pulmonary artery pressures and blood glucose concentrations. Artificial intelligence and other analytical processes bring more precision to interpretations of what the gaze sees.

And yet, while the gaze becomes more expansive than before, it is ever less pure. The language the gaze requires for all it can potentially see has not evolved sufficiently, and so some of what a technology can detect cannot be seen in practical terms. A gaze focused on disease draws attention away from illness and drags its users back towards classificatory medicine. The gaze classifies images of plaques and neurofibrils as dementia, and images of clogged coronary arteries as heart disease without regard to what people experience as illnesses. Of greater significance, though, is that the “silence” the gaze requires is less achievable now. Many and varied sources anterior to that of the visible cloud the gaze; health care industries; government agencies; elected officials; patient groups; professional medical societies; mainstream and industry media; academia; and even the arts among others. Seemingly countless mechanisms exist for these sources to affect the gaze and influence doctors. Alas, the gaze still dominates its masters.

Foucault does not make it easy to understand his ideas. Perhaps the translation obscures his ideas to a degree, but some scholars have suggested that Foucault is purposely abstruse and prolix (to use one of his own favorite words). The major thrust of this book is also obscured by some French history and Franco-centrism that while interesting does not clarify. To appreciate The Birth of the Clinic requires more than one careful reading and the aid of Foucaultian scholars who have worked through his ideas. Done this way, however, Foucault rewards the reader interested in how medical knowledge and the clinic came to be.