Sarat Munjuluri MD is a psychiatry resident at Baylor College of Medicine.

I cannot recall the date you died. My memories are both foggy, perhaps a subconscious protective force against the despair in recalling your last days, and intensely detailed. I’d like to believe you passed away peacefully, but it was undoubtedly ignominious: on the cold tile floor of the laundry room, your body already stiffened and ashened by the time I summoned the courage to touch you. I had hoped to avoid you altogether. Let the hospice vet, scheduled to arrive later in the day, carry the burden of presiding over your death. But the rest of the family wanted one last opportunity to talk to you. I’m a doctor, as they pointed out, so logically I ought to come to your side first. Even though I had never done a death exam before–let alone one on a family member or a someone of a different species–I had been trained in assessing for signs of life. 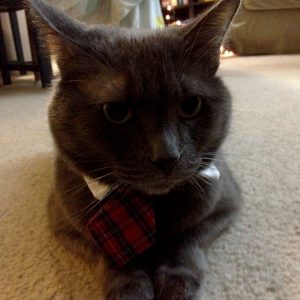 Your heart seemed like an appropriate first step. I put my stethoscope to your chest. I was taken aback by the scratchiness of your bristly hair rubbing against its bell. I pushed further, dreading the emptiness that soon engulfed me. I thought of checking for pulses. Radials, carotids, easy enough to find on a human. Were yours anatomically similar? Did I possess the strength to clutch your paw in my hand? There was something even more intimate and terrifying when my assessment tools were lost, in using my vitality to evaluate yours and touching skin to skin. I skipped it and hoped your iridescent eyes would give me the answer. I flashed a light. No reflex. I turned around. The rest of your family was but a few feet away. They mimed the words before I could speak. You were dead.

The finality of the declaration troubled me, as if I had some control over your passage from this world. That was a decision between you and God. I was not a worthy intermediary. In some sense, I was a reporter, though I did not feel certain of my facts. Perhaps you still had thready pulses or faint breaths. I never checked. Is it unreasonable to cast that burden onto a professional? I was grieving and now witness to the image of your corpse. I couldn’t do much of anything, no matter my training.

The next day, I attended a retreat organized for all psychiatry residents. The first activity was an innocuous ice-breaker in which we were asked to meet and greet through a ruse: find individuals who fit a mish-mash of predetermined categories, including those who spent time abroad, spoke more than one language, etc. The idea was to strike up conversations, obtain the matching person’s signature (it is a game of course; the more signatures accrued, the better), and hopefully, form new friendships.

My stomach churned when I saw the last category: has three pets. I did until the day before. Three cats, Oliver, Penny, and Callie. Now two. But it was too late to voice my concern. My colleagues hustled towards me, begging for signatures. At first, I lied. Sorry, never had three. But they kept coming, and out of exasperation, I told the truth. It was awful and uncomfortable: your death, or rather my disclosure of it, a leaden cloud enveloping the mirth of people desperate to celebrate a day away from the stress of work. They shirked away, thankfully. I sat silently, staring at the plastic folding table in front of me, the drone of talk and movement momentarily crowding out thoughts of your last minutes. At some point, I left. Better to spend the day with family and explain nothing more of how I felt. They would understand.

We met at the Children’s Museum. The kids bolted directly to the mock veterinarian’s clinic. (They still call it the vegetarian clinic.) The four-year-old pretended to give you a checkup. The stuffed kitty was a tiny calico. You were Blue Russian royalty, grandiose in personality and physicality. But as she smashed the plastic otoscope against the kitty’s knee to elicit a reflex, I distinctly heard her yelp your name: Oliver. Oliver, you need to get better. Oliver, you need to come back.

I became draped in sorrow. I suppose I had hoped that your loss wouldn’t register in her. At least not so quickly. And in turn, any innocence I assumed she had towards the everyday cruelties of life was fast fading. But what do I know about the mind of a child? Perhaps she was engaging in her own grieving process, and she didn’t need me to explain the details. So, through my tears, I endeavored to smile and encourage her.

Over the subsequent days, sadness would overcome me in waves. But part of the beauty of young children is that they force your hand. We went to the playground, to Costco, and generally got on with things. They demanded it. Doing so helped me to cope, though the consequence was that I began to forget about your daily presence. There was only so much room in my hazy mind. The area dedicated to you got usurped.

That is, until I was asked to declare another death–my patient–a few weeks later, shortly after starting a rotation on internal medicine. Mr. M and his family knew that the end of life would soon arrive; he was in multi-organ failure. Each day he was less coherent. His hunger for food subsided. His diet was morphine.

Performing a physical exam on Mr. M proved to be no less agonizing than doing so on you. I was numb, cold, and sweating profusely. Eventually, I brandished my stethoscope, and despite efforts to focus on the task at hand, was flooded with memories of our first meeting. The nondescript Petsmart. Barbara, the owner of the rescue agency, opened your cage. You kneaded on me and I writhed in agony. You had meticulously sharpened your claws, and I was wearing shorts (lesson learned). You purred and sat on my lap. I thought of rubbing your head like I would a dog but stopped short. I didn’t know how to pet you. I had never been around cats. So, Barbara taught me: stroke the side of your mouth, which releases feline pheromones. Gently massage your racing stripes–the bald spots below your ears. The decision was made; you had a new home.

Mr. M’s heart had stopped. I drew his arm closer to me and inspected the scattered bruises, sequelae of blood draws and failed IV line placements. I remembered the tent of skin we made under your scruff, how you never flinched when I stuck the needle through it and delivered another set of fluids. The vet told us you had kidney disease, and that daily subcutaneous fluids would flush out poorly processed toxins. We found the ritual to be somewhat comforting; it was time dedicated solely to you. No screaming kids; they were fast asleep. And we were helping you to feel at ease.

It turns out that we flooded your lungs and hastened your death. That fact we found out a week before you died, at the same time the vet diagnosed you with lymphoma. You had the right to be indignant towards us or profoundly hurt that we did not protect you. You could have hidden away from human contact, free to move on without any reminder of the guardians who failed you. Instead, you spent more time with us. You permitted the children to aggressively hug you and invade your personal space. (We did try our best to keep them away, but corralling toddlers is a bit like herding cats.) 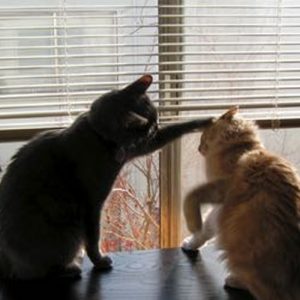 Perhaps you had yet another lesson to deliver in compassion and forgiveness. Your patience as a teacher knew no bounds, and insofar as I can tell, you had been working these concepts since the day we met you, nearly ten years prior. You willingly accepted your new chapter in life with us as your caretakers. We stumbled many times: the high protein food caused bloody diarrhea; baths irritated your sensitive skin. You never did ask for cat siblings but got them anyway (eventually you seemed to begrudgingly accept Penny, though Callie was another matter). We moved. New apartments, then homes, then plane flights and a new state for residency. Also, the kids. You were always the apple of their eyes. Every night when I’d ask them what they were grateful for, they’d invariably list you first: they were sunny because Ollie sat next to them while they played with their toys, sunny because Ollie forgave them for pulling his tail.

I am often annoyed with the kids’ behavior, and I helped bring them into the world. But I see in them the same as with you: minutes later, the emotions have ebbed, the quarrel over, life resumes without a skipped beat. They do not yet ruminate. They are not yet scarred. I need this daily instruction. To forgive, even for minor hiccups, has somehow become unnatural. I keep checklists of flaws, the longest of which are with my loved ones. They are an inventory to recall at any given moment, a means to justify an argument, evidence that character is immutable. And to be kind precisely because of these failings, in myself and others, is the most difficult challenge I have faced.

I worry that the kids will adopt these same characteristics. Rumination and scarring seem to be the way of adulthood. The human kind, anyway. But not with you. You spent your last days on Earth in our presence, and it brought us immense joy.

Mr. M’s pulse had stopped, and his neurologic system had shut down. It was my responsibility to inform his family that he had passed. I accepted that I was tired and terribly nervous. I forgave myself in advance for screwing up the subsequent conversation and then started. I acknowledged that I had few answers for why he died, and that my understanding of the human body and its limitations was not complete. It will never be. At that point, I stopped talking. I listened–a lesson I learned from you. I hope that being present and mindfully listening comforted his family during such agonizing times.

You are still teaching us, even after you have left.