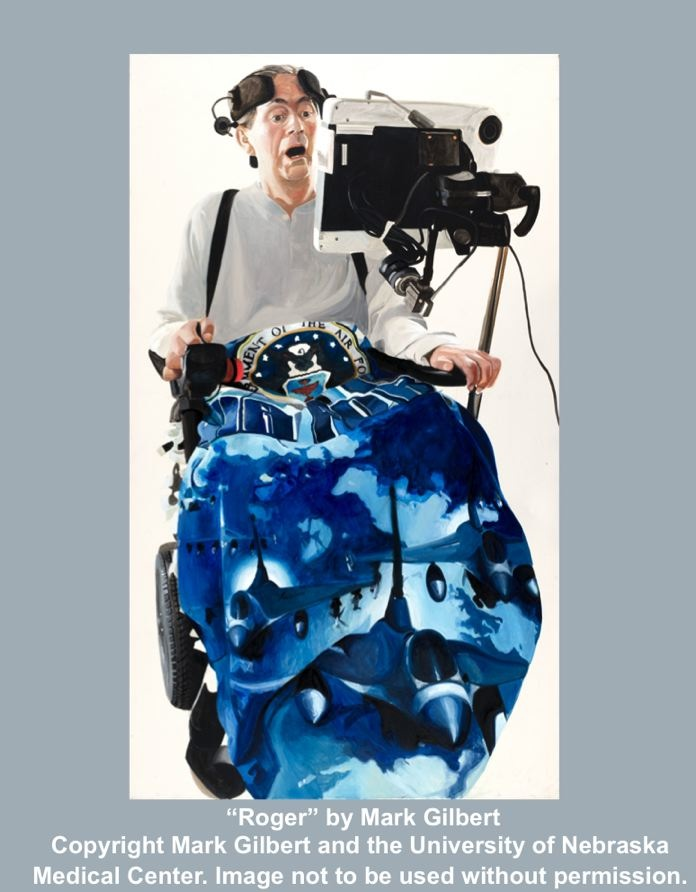 The exhibition “Here I Am and Nowhere Else: Portraits of Care” explored 45 individual’s experiences with health, illness and caregiving. Three-thousand people attended the inaugural ten-week exhibition of the works that concluded on February 21, 2009 at the Bemis Center for Contemporary Arts in Omaha, Nebraska.  The exhibition arose from a qualitative research study that two of the authors, V.A. and W. L., designed with Scottish artist Mark Gilbert for his two-year residency at the University of Nebraska Medical Center (UNMC). The study, approved by the UNMC Institutional Review Board, included a number of stages  from the design phase to the recruitment of patient and caregiver subjects, to Gilbert’s active drawing and painting phase, and finally to several stages of analysis and most recently to the exhibition of works.  The findings of the study will be published elsewhere, but we thought blog readers would be interested in knowing about the exhibition and how, as contemporary art, it played a role in helping exhibition viewers engage in an ongoing conversation about the nature of health, illness, care and the challenges, both professional and familial, of caregiving in our society. The exhibition included portraits of 25 patients from across the lifespan representing many varied situations on the spectrum of health and illness and 20 caregivers, both professional and familial.  The portraits served as a focus of conversation during the exhibition and a series of organized lecture-discussions about issues raised by the paintings. We describe below what transpired as we considered Gilbert’s large drawings and paintings that revealed obvious and subtle truths about health, illness, care and caregiving.

The Idea of Care and the Role of Contemporary Art

One of the important ideas that arose from the earliest analysis of the drawings and paintings of patients and caregivers was the idea that care is a non-instrumental, holistic process of personal engagement.  We also discovered that the boundaries of this engagement were not as defined as we had originally assumed-all human beings share in the experience of care and caregiving–sometimes as a patient, sometimes as a caregiver, and sometimes as both at the same time. This realization was further strengthened by patients’ willingness to participate in the study in order to “give back” so that others might learn from it.

To frame the important ideas, we invited the public to a pre-exhibition reception and evening of short background lectures the night before the actual gala opening of the exhibition at the Bemis Center for Contemporary Arts. The first brief remarks were made by project investigators about the origin of the project.  Following this, the Director of the Bemis Center for Contemporary Arts, Mark Masuoka, spoke on the role of contemporary art in society and in particular about the role of this exhibition in the on-going national discussion about health care.  He was followed by artist Mark Gilbert who spoke about his experience working as an artist-in-residence within a medical center with patients and caregivers. Finally, Emeritus, US Poet Laureate, Ted Kooser spoke about his experience as a patient featured in the exhibition.  Kooser then read a selection of poetry about his encounter with illness helping to focus the events that would follow during the exhibition.

The opening lectures set the stage for a series of three gallery discussions that took place every other week during the exhibition itself when we invited a speaker or panel of speakers to share with the audience their insights and experience about care relative to the drawings and paintings.  After each had spoken, the speaker(s) opened the discussion to the audience so that a give-and-take conversation about the topic could take place.  We held the lecture-discussions in the gallery itself, with the portrait works all around us.  Attendance varied between 80 and 150 participants.

For the first lecture-discussion on January 15, 2009, we invited a panel of patients and caregivers to talk about their experiences with the portrait project and we asked how it had influenced them in thinking about their roles, whether as a patient, a caregiver or both.  Two patient subjects spoke. One had undergone bariatric surgery for the purpose of health promotion while the other had been under treatment for brain cancer over a period of 10 years. Of the two caregiver subjects who spoke, one was a familial caregiver, the other a physician.  Panel members spoke about five minutes each about their experiences of being drawn or painted and then reflected on the meaning of it in their lives. The patients both stressed how the artist had succeeded in seeing them as whole people, not just physically but psychologically intact and the importance of that for effective care to take place.

Following these comments, we passed the microphone among members of the audience and many reiterated the importance of the relationship that exists between the ill and those who care for them-emphasizing that it is the relationship that is the heart of care as it unfolds in the doing of care.  Several people also raised the issue of how difficult it is both to be the recipient of care as well as the giver of care.  They spoke of our human condition that must yield to being both giver and a receiver of care, at different times or sometimes, at the same time.  Both roles are difficult and demand changes in who each is as a person, in personal identity, the topic of the second lecture -discussion.

On January 29, 2009 Dr. Carl Greiner, a psychiatrist, spoke about the introspective nature of the portraits and what they imply about the nature of care and its relationship to personal identity. Walking from painting to painting in the softly lit gallery he engaged audience members in observing and explaining what they saw in the drawings and paintings. For example when he focused on one large almost 6’X6′ painting of the head of a bald young man nearing the end of his life despite chemotherapy for cancer, Greiner discussed what the audience’s observations implied about the patient’s psychological state and probable hopes, fears, and transformation due to illness.  This portrait is so compelling that it brought out psychological responses of audience members who articulated their own fears of cancer and death as they sat face-to-face with the raw truth of this young man’s life and imminent death.  In the communal and safe space of the gallery viewers engaged with others in the audience to articulate the most basic of human fears that were roiling within them. Greiner emphasized that the psychological and emotional states observable in the portraits and within us as viewers represent the common threads of our shared humanity.  When patients and caregivers interact in the transfer of care at such a level of shared, common experience, the identity of both is transformed.

The final program on February 12, 2009 featured a panel with the artist, the curator of the exhibition, Hesse McGraw, and the Director of the Bemis Center for Contemporary Arts.  In this presentation, Gilbert spoke from the artist’s point of view, emphasizing the effect that the project had upon him.  Reflecting some of the discussion at Greiner’s presentation, Gilbert spoke of the difficulty he sometimes had in continuing with the work day-to-day, so powerful had its effects been for him as he worked with patients at critical times during their lives. The caregivers also had a profound effect upon Gilbert as he felt in some manner the gravity of the work they do. As the project proceeded he found that these challenges, far from being a hindrance, were to prove the driving force in the creation of the images. Gilbert spoke of the variety of powerful emotions and states of being that he was “privileged” to witness and tried to harness.

McGraw followed Gilbert and spoke from the curator’s point of view about presenting the work to the public. He pointed out that the portraits show the basic things that are needed to build a relationship in care such as trust and respect, but added that these portraits go far beyond that to tell intimate stories in a context of care. Using this idea, he then went on to ask those in attendance how the portraits might change our notions of what medical care in the contemporary world could be.  Then Masuoka spoke from the Director’s point of view about the role of contemporary art in highlighting and informing pressing societal issues, particularly health care. He said that art has the capacity to “kill” false assumptions that lead society down false paths.  He argued that this project, as contemporary art, has the capacity to inform viewers about what care is at a human level, and to inform viewers about what care should entail.

As we enter into a national conversation about healthcare reform, an exhibition such as this is important, he said, in helping the public to address what is critical to the enterprise.   If the views of McGraw and Masuoka are valid, and we believe they are, contemporary art carries a heavy responsibility. Yet as the microphone was passed about the audience of more than 180 people, it was clear that audience members had engaged with these heavier questions about the role of health care in our society.  It was equally clear that for those in attendance, the most critical element of care is the human element.  This of course does not eliminate the need for the more technical medical and surgical aspects of care, but emphasizes that humane judgment in the doing of care is essential.

We have found our collaboration bringing contemporary art and medicine together to be extremely rich as both a research model and as an educational approach to explore the meaning of health, illness, care and caregiving. The exhibition of portraits of patients and caregivers and the related lectures and discussions about issues germane to the portraits have helped all who participated in these events learn a great deal. Our future plans are to tour the exhibition, along with an accompanying curriculum that can highlight important ideas that arise from it.  An exhibition catalogue is also available that includes reproductions of the artworks and essays written by the project originators, the artist, the curator and Bemis Director and others as well as by a select number of patients and caregivers all of whom provide varied perspectives. We are in the process of assembling a package that will allow the exhibition art works, curriculum, and catalogue to travel to other venues to be shared. For more information, please contact either Virginia Aita (vaita at unmc dot edu)    or the curator Hesse McGraw at  hesse at bemiscenter dot org.

Mark Masuoka, MFA is the Director at the Bemis Center for Contemporary Arts, Omaha, Nebraska

Acknowledgements:  We wish to thank the following for their support of the exhibition, associated program and catalogue: